Hi guys! I needed another forum to ask questions and learn from. This one seems perfect. You'll be seeing me around.

Feel free to ask questions and i'm sure other members can benefit from the discussion.

That is an impressive list. Post up some pictures we'd love to see how you're keeping all these.

Welcome to the forum!

I guess you can say that my pride and glory are my grandidieri. All the G. Grands, C. Gracs, B. jacks are sub adults and I also have a lot of babies, but I have enough of everything to eventually breed. At the moment, my O. innesi, A. bicolor, P. liosoma, C. exilicauda/ margaritatus, M. gibbosus, B. malhommei, and V. carolinianus are all gravid, so I guess I'm just waiting for a tub of POP-corn. I haven't really had any trouble with anything, other than bad molts. I've been doing this for just over a year, and I don't think I'll ever stop. I love it too much. There are several species I would love to introduce to the American trade like Uroplectes, Tityus, and Lychas. I don't own a camera at the moment, so no pics for right now. I used to only keep tarantulas but ever since I bought my first scorpions(Grosphus grandidieri), I want nothing to do with any other animal. I regret getting rid of my Rhopalurus pintoi/crassicauda they were gorgeous and I now have the adequate space for them. I really need a male LQ, which'll probably be my next purchase. I'm scorpion crazy because I love everything about them. I really don't care if I sound obsessive, it's my own drug that reminds me of the fact that nature can be both efficient and beautiful. They're like little bio technological war machines! Thanks for reading, and the feedback guys.

Once the popcorn machines start working for you. Sell some scorplings to fund a camera!

There's no regrets in sharing joy through images

Welcome to the forum! 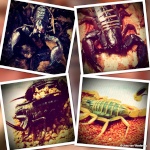