I am writing here to report the unfortunate and unusual circumstances under which my adult female Babycurus gigas has died.
If anyone can share any further information in regards to this topic that would be useful, but I guess I mainly just want to share this experience that these odd and unusual incidents CAN and WILL happen.
TL;DR = Cricket devours scorpion.

I've purchased my 1.1 Babycurus gigas on 12/12/15 with intent on breeding them. They've been housed individually in temporary housing while I sort out a larger enclosure. Their conditions have been identical, day temperature ~23-28C, humidity ~70%. They both fed every 7-10 days on one large cricket, the smaller male seemed to have a much better feeding response than the female, who was more shy when it came to feeding. The male will not hesitate to go for the cricket as soon as you put it in, while the female rarely showed any feeding response while being observed. Although the cricket was usually gone the next morning.

31/01/16 ~9pm, put a large female cricket in with my female B.gigas. She exhibited no feeding response at first, however seemed to react to the cricket being there. I put the lid on and left her to it, the usual procedure.
02/01/16 ~8pm, checking on all of my scorpions, open up her tub to find her half devoured.
The cricket was not near her but looks like she had a good feast on her body cavity (see photos attached). This struck me as very unusual, kept in identical conditions to my other B.gigas, was not moulting, showing no signs of about to moult, completely healthy apart from preferring a bit of privacy when it comes to dinner time. I wonder if the scorpion had died, and then the cricket began consuming the scorpion, or the cricket starting eating a not very hungry scorpion while it was still alive, I will never know. But it seems odd for the scorpion to not react at all unless it was already dead, but then why did it die in the first place? It also surprised me that the cricket was able to get through the exoskeleton into the body cavity, noting that this scorpion was not fresh from a moult, but a fully grown adult (~3.5cm body length, exc. tail segments). 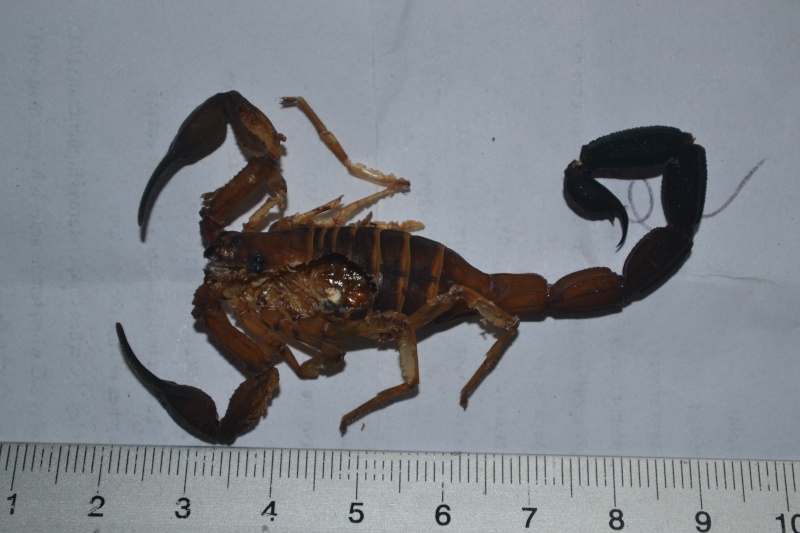 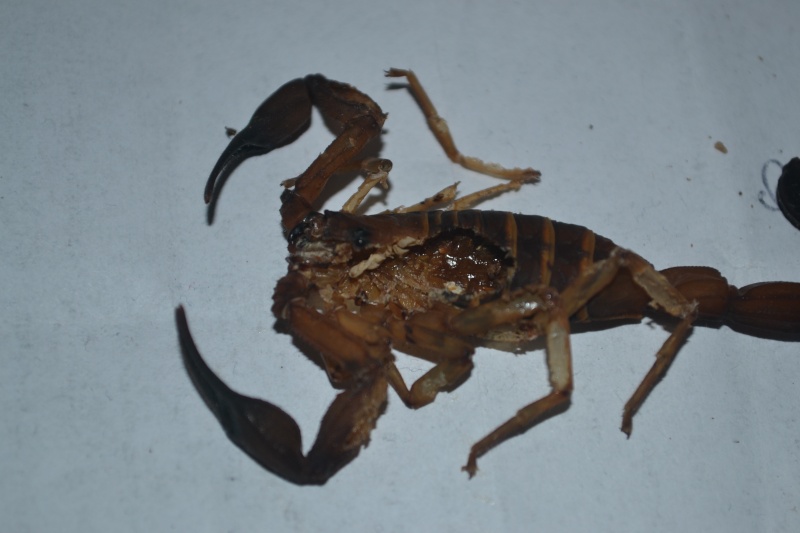 Note that mainly the body cavity was consumed, but also the legs and proximal parts of the pedipalps seem to have been nibbled at.

It is safe to say I will from now on keep a much closer eye on feeding, as what appears to have happened is that a hungry cricket will happily eat a not so hungry scorpion. An interesting series of events which I have not heard of; unlikely to be a husbandry issue, unlikely to be a moulting issue, therefore why I am posting this here.

Sorry to hear about this unfortunate incident.

An large cricket, is usually daring in exploring (when it's in an active/healthy condition) the enclosure, and will likely to 'test its luck'(nibbling) on possible food items. And we never know what's in the scorpion's mind.. even when the scorpion is not hungry, why the hell wouldn't it just give that cric a stab to sedate her instantly.. we may ask..

But the fact is.. even this was not a case of an old female scorpion which is dying (unlikely in your case)..such weird response from a predator does happen...

After attempts of moving away from an annoying cricket (which keeps following and trying to get a bite).. at certain point.. the scorpion may simply give way (probably exhausted), and succumb to the pestering cricket.

Btw, the nibbling of the exoskeleton of the adult scorpion by the cricket seems legit. They can do it. Even though the exo is not soft.. e.g. freshly molted or about to molt..

Best policy is still not to leave an active/healthy cricket (young or adult) in the same enclosure as our scorps.. if we must do so, at least.. damage the cricket and make it almost half dead.. without most of it's legs.. that will lower it's confidence of turning the table around in the predator/prey game.

But i must thank you for the sharing. It will help fellow hobbyist to be more careful of unexpected scenarios such as this.

Similar topics
» Death to broccoli...
» UH OH - Did you see the weather report?
» CoCoRaHS-report rainfall
» Winter Report So Cal - any frost damage out there?
» So Cal December Garden Report