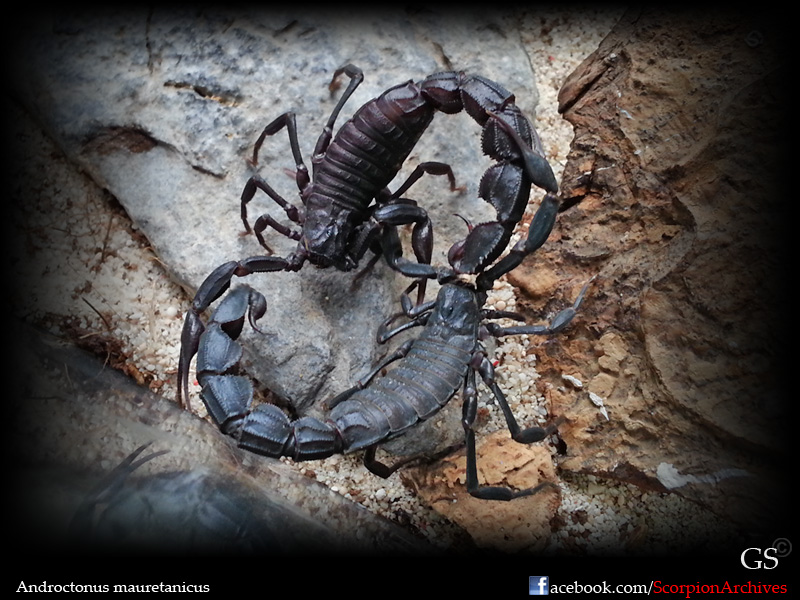 How Do Scorpions Mate and Reproduce:
This is a basic guide on how can we go about mating a pair of sexually matured specimens. Note that there is no definite way of doing this as different breeders may have their own methods. This is just something that has worked well for me over the years that I would like to share with you

Size of tank
- For desert/ forest specimens: 30cm by 15cm by 25cm (length x width x height)
- For bark specimen: 16cm height with 8cm Square base
- The above should be the minimal size, larger enclosure will do fine as well. just ensure ample hides are provided. 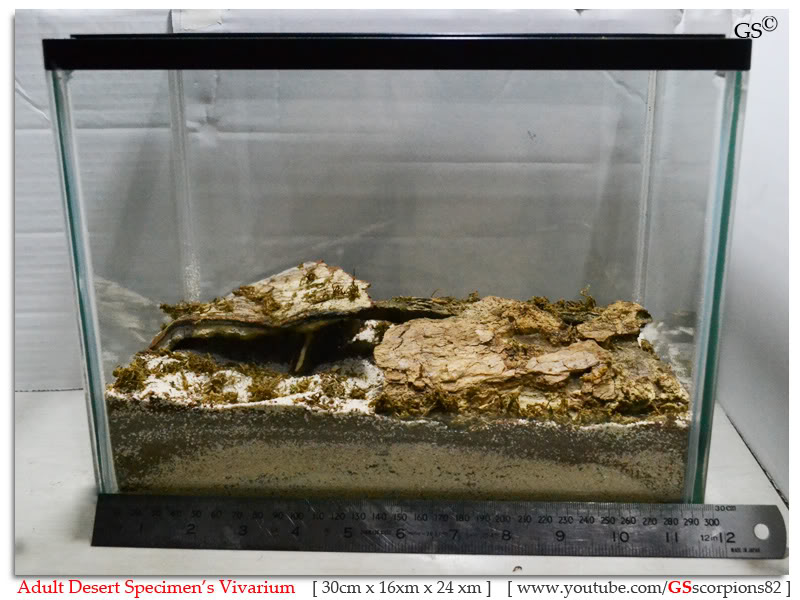 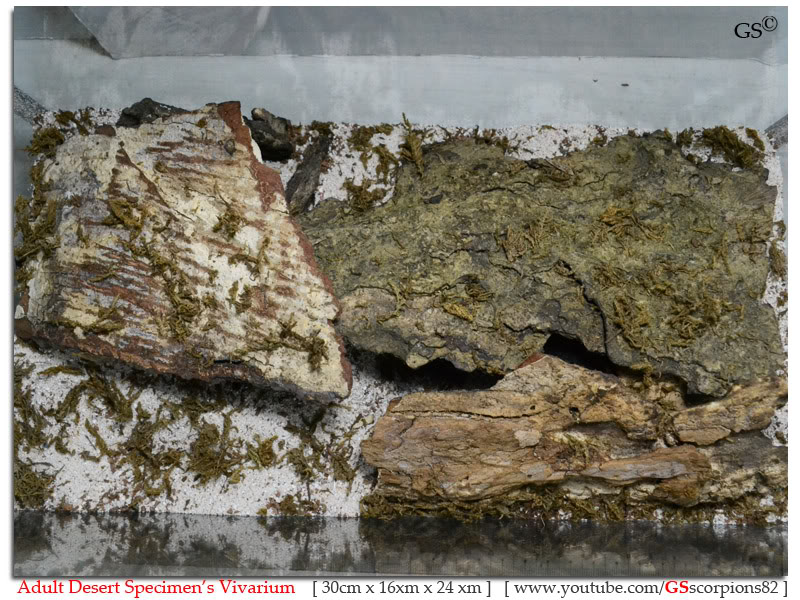 Types of "platform" for the male to deposit his spermatophore.

- A piece of flat slate: 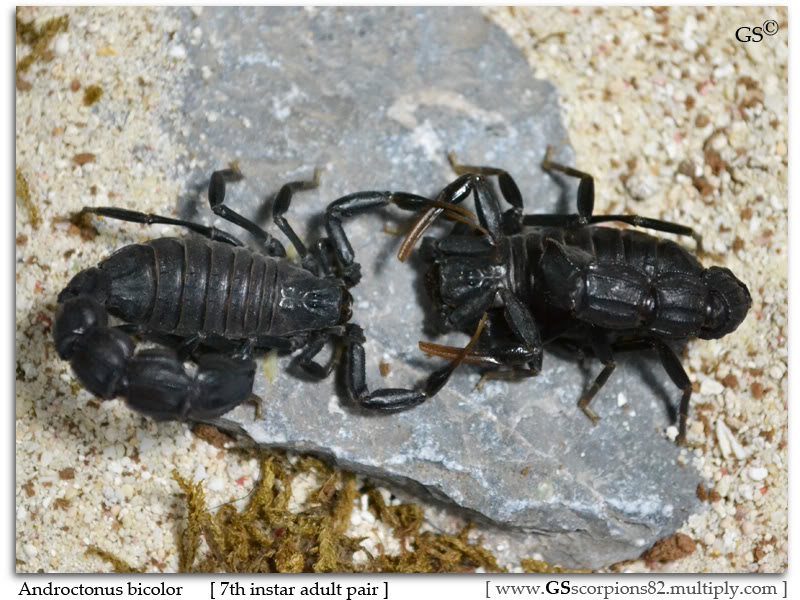 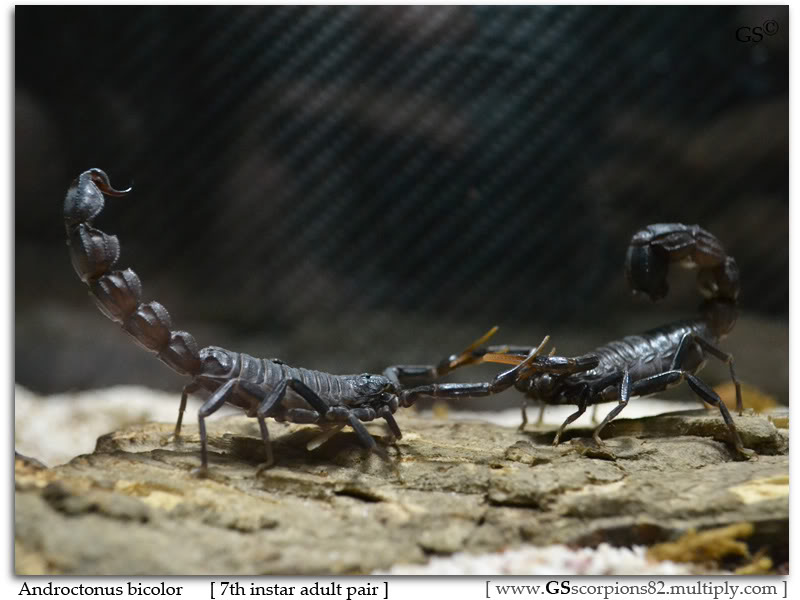 It is not a must to provide both slate and a flat piece of bark but i do like to offer the male an alternative platform for his choosing.

Substrate
- When it comes to mating, the crucial point is definitely not the substrate depth or if your substrate is the correct type, as there can be successful mating attempts in just a empty kritter tank.
- The substrate below are of minimum requirements to facilitate your decision of allowing the female to continue living in the same tank after mating. Whether to remove the male or not depends on individual circumstances.

Mating preparation for the females:
Refer to this para if you have raised a female specimen to her moult to adulthood from sling or sub-adult:
- After your female's final moult to maturity, i will recommend you allow her to fully harden up BEFORE relocating her to the mating enclosure.
- Period to wait for the hardening of exo-skeleton is minimum 1 week or recommended of 10 days waiting after final moult.
- After female has fully harden up and shifted to the new enclosure, allow her to get accustomed to the surroundings for a period of 1-2 weeks
- Yes, we should keep the female well-fed prior to a mating attempt with a male but try not to feed her till she's looking all FAT like a gravid female
- After taking down 2-3 feeder, over a period of 1-2 weeks, she will be ready for mating

Refer to this para if you have received an adult female via shipment:
- Allow her to settle down in her new enclosure for a minimum of 1 week before introducing the male for mating
- During this waiting period, keep her well hydrated by offering a small bottle cap of water at one corner of her enclosure
- Depending on her current state of hunger when she was being shipped to you, i would recommend at least offer one feeder at the third day after settling in her new enclosure

Mating preparation for for the males:

Refer to this para if you have raised a male specimen to his moult to adulthood from a sling or sub-adult:
- Male is left undisturbed for a min period of 1-2 week after his recent molt to adulthood

Sample picture below on the final moult of a Rhopalurus junceus male:

Refer to this para if you have received an adult male via shipment:
- Allow him to settle down in his new enclosure for a minimum of 1 week before introducing him to the female's enclosure for mating attempts.

- During to the resting period of 1-2 weeks, keep the male hydrated and well fed 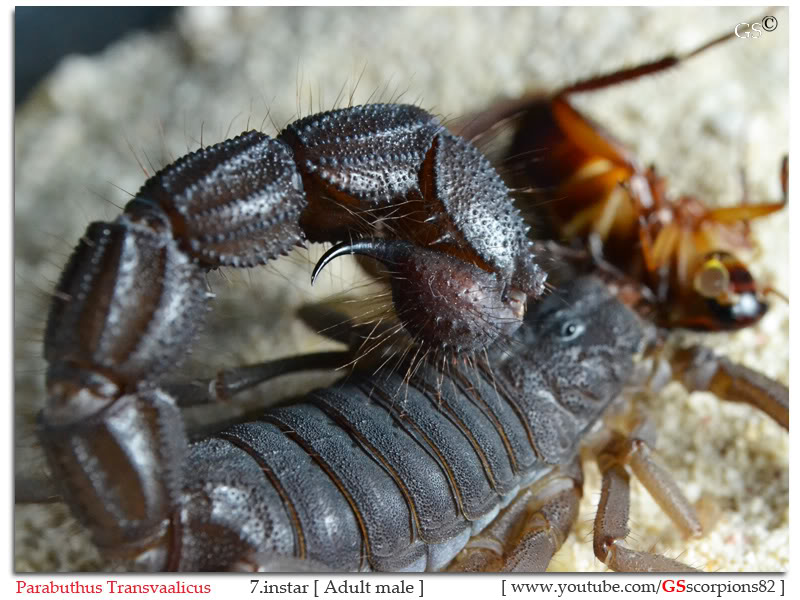 How to start the mating process for the couple?

1. As you have heard, always introduce the male to the female's enclosure, you are right with that. If the female is hidden within her hide, you may let her be and allow the male to locate her all by himself and "extract" the female out from the hide after he has tracked down her pheromones. 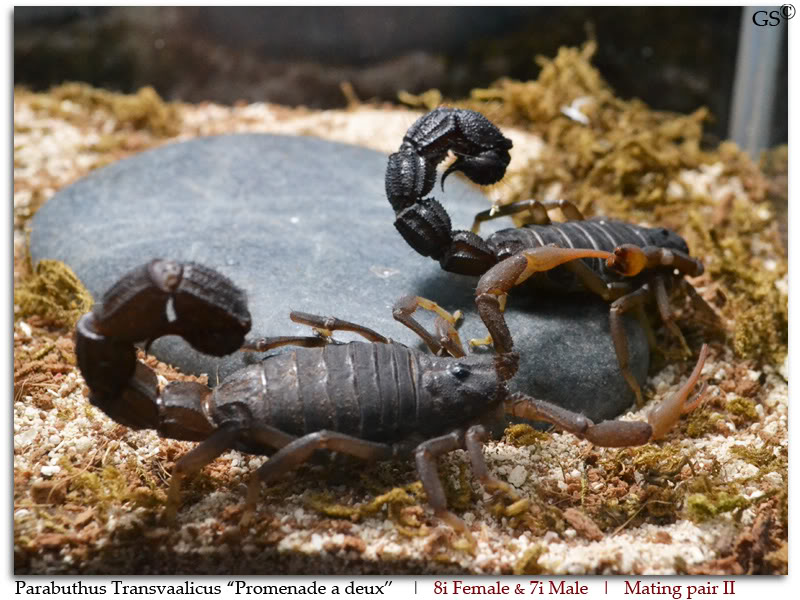 2. Always introduce the male to the female's enclosure with minimal stress to the him (e.g. do not hastily pick the male up by the tail with a pair of tongs). There are a few ways to do the transfer. Personally, i prefer to gently nudge the male onto a flat piece of slate / bark  and lift the whole "platform" with him on it.

Using your bare hands to lift the bark for highly venomous specie is not recommended. A suggestion might be wearing thick gloves while doing the transfer or other safety methods which you are comfortable with. Using of tongs is safe but be careful not to slip and drop the specimen.

Just remember to place great emphasis on your own safety. Ensure you are doing it over low grounds and with ample space all around you and an empty deli-cup nearby (as standby in the event of an escape)

3. Place the male gently at the other corner of the tank from the female, it is not necessary to plant him right in front of the her. Usually, if the couple is sexually ready for mating, the male will detect the pheromones from the female and engage in the mating within minutes. 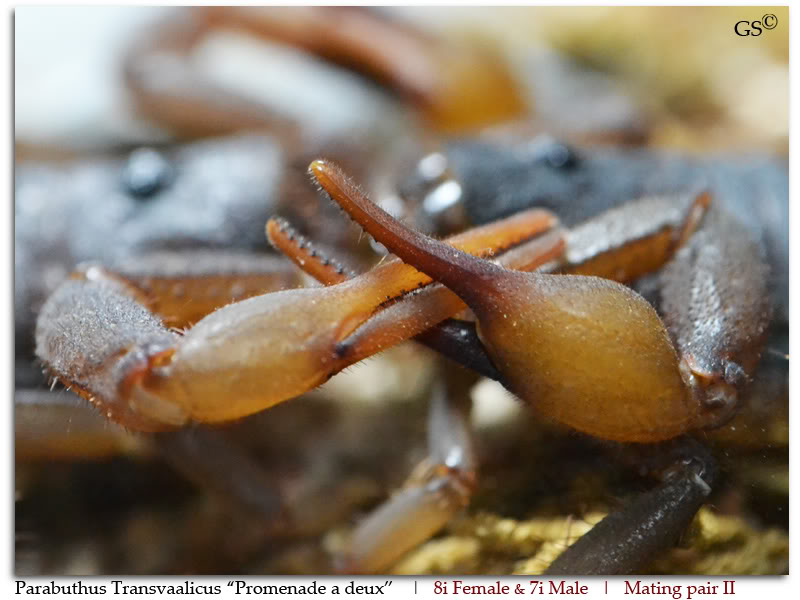 The mating session can be as short as within 15 minutes (in my scenario) or as long as 1-2 days. This is dependent on how co-operative is the female and how long does the male takes to secure a "suitable spot" to deposit his spermatophore. If there is too much delay from the male, e.g. more then 1 day, the female may lose interest and initiate a "break-up" from the "mating dance"

What should be done after the mating has completed:
- Observe if there is hostility from the female.
Although It is rare for the female to cannibalize on the male after mating but some females does exhibit hostility towards the male once acceptance of spermatophore was completed.

The following are a few documented scenarios at the end of a mating session:

a) No signs of aggression from both parties
- The male releases the female from his grasp since the package was already taken but he will still hang around the female and continue in a few more minutes in vibrating motion, at this time, the female might be seen rubbing her genital operculum against the substrate or a given slate. If the pair has shown no further aggression, they can be continued housed communally. I'll recommend to remove the male once you are sure that the female has been successfully impregnated. (See observations of a gravid female)

b) Short-term scuffling
Just before the male releases his grasp on the female's chela, slight aggression can be seen from her female e.g. with the female throwing a sting at the male and give a short chase but will usually NOT put up a determined chase but a rather short "temper display" so to speak. Usually the male would fend her sting off rather quickly and "sprint off" frantically and stays protected within in a hide if he managed to find one. The is the reason, it will be good to provide multiple hides in the mating enclosure. If the pair has shown no further aggression, they can be continued housed communally. I'll recommend to remove the male once you are sure that the female has been successfully impregnated. (See observations of a gravid female)

c) Prolonged aggression
In some rare occasions, the pair might be "locked down in a fight", possibly due to a persistent aggressor (usually female) or due to the shortage of "get-away-hideouts" for the male. If the aggression seems to get out of hand, you may quickly separate them with tongs and use a larger deli-container to temporarily barricades the aggressor while you carefully remove the male into a separate enclosure. 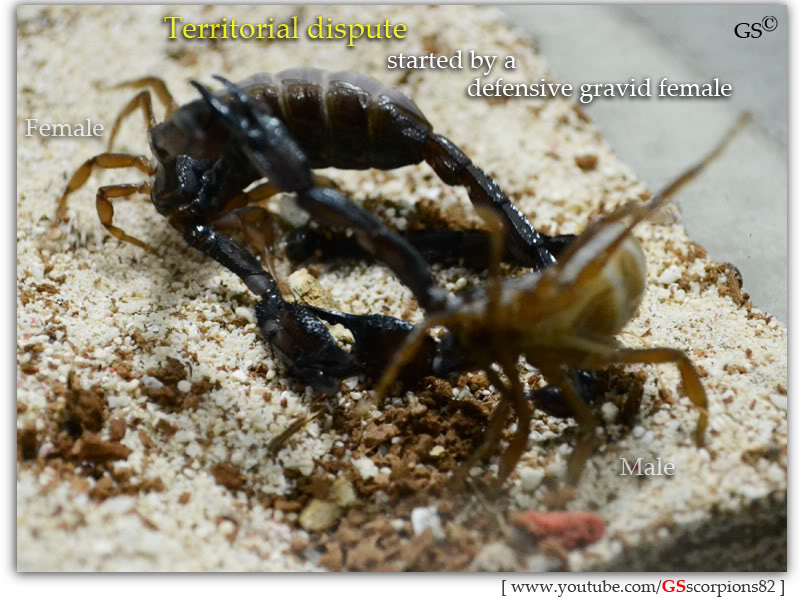 How to increase the chance of successful impregnation of the female:
I would recommend a minimum of 3 mating session from a resting interval of 1-2 weeks to ensure that the female was successfully impregnated. After the first mating attempt, you may proceed to mate them again after 10 days. Depending on the specie, i have seen males who can regenerate his spermatophore within 2 days and majority of the males are ready for 2nd mating after 7-10 days. It is also good that you may have multiple males to a single female for the breeding project.

At subsequent mating attempts, once the female exhibits reluctance or aggression to the sexual advancement of the male (e.g. the male tries to engage her by grabbing her chela), it is possible that she has been successfully impregnated and is preparing for her incoming brood.

Gestation period may varies for different species. Factors influencing the gestation period might be optimal temperature, adequate ventilation and water supply. In short, it is the provision of optimal enclosure for the brooding female.

Observations of a gravid female:
The visibility of embryos is not definite for all gravid females as some are more obvious than the other but generally, they usually appears in the later stage of gestation. You might be able to spot embryos gleaming through the pleural membrane: 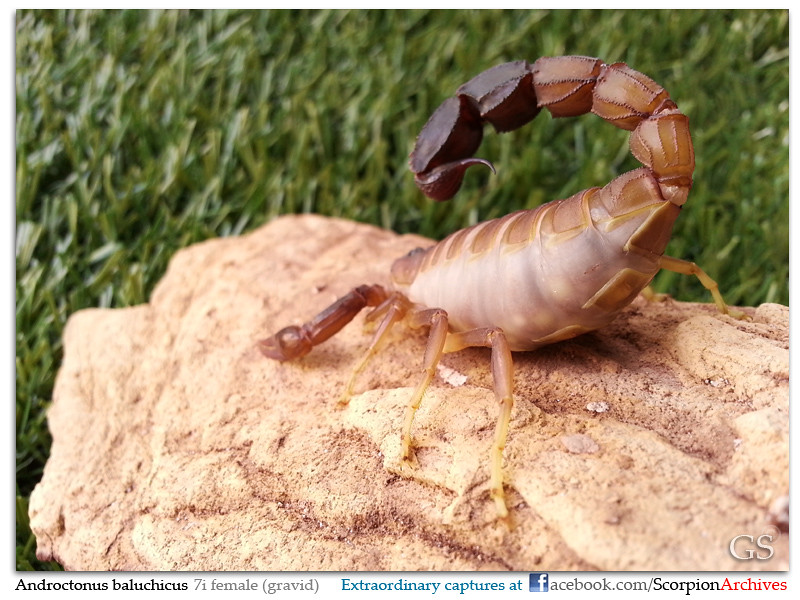 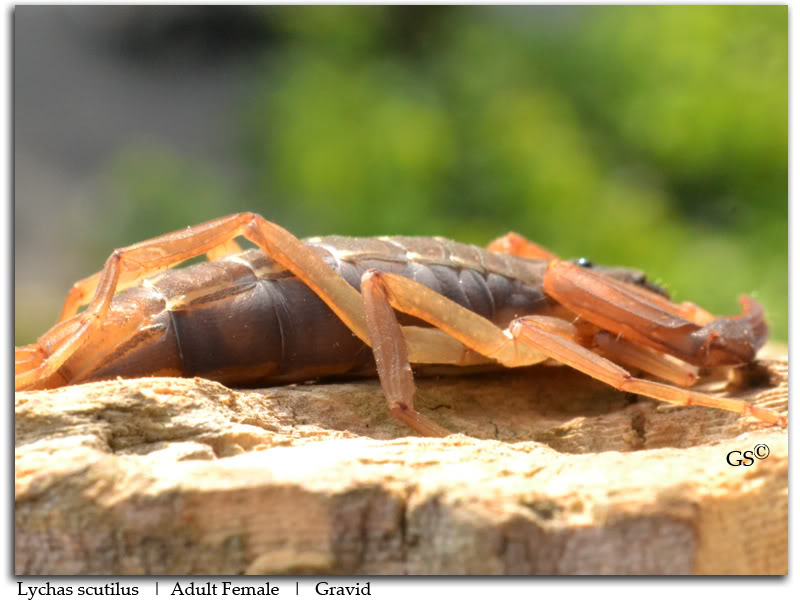 Yes, Hottentotta hottentotta are parthenogenetic, i have placed their pictures below as a demonstration on visible embryos. 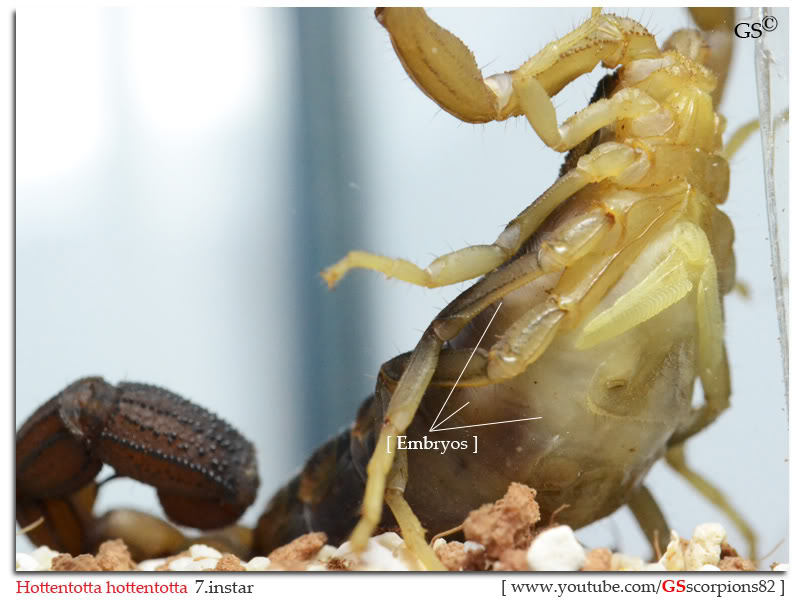 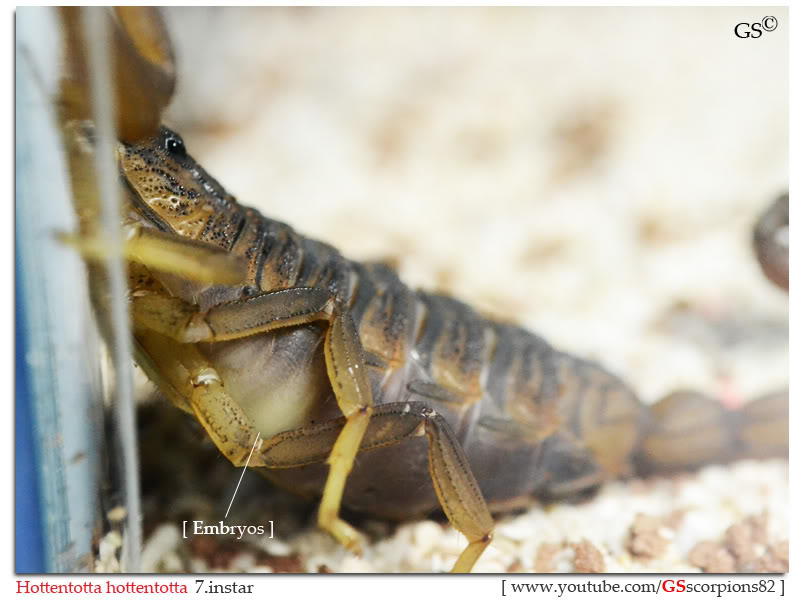 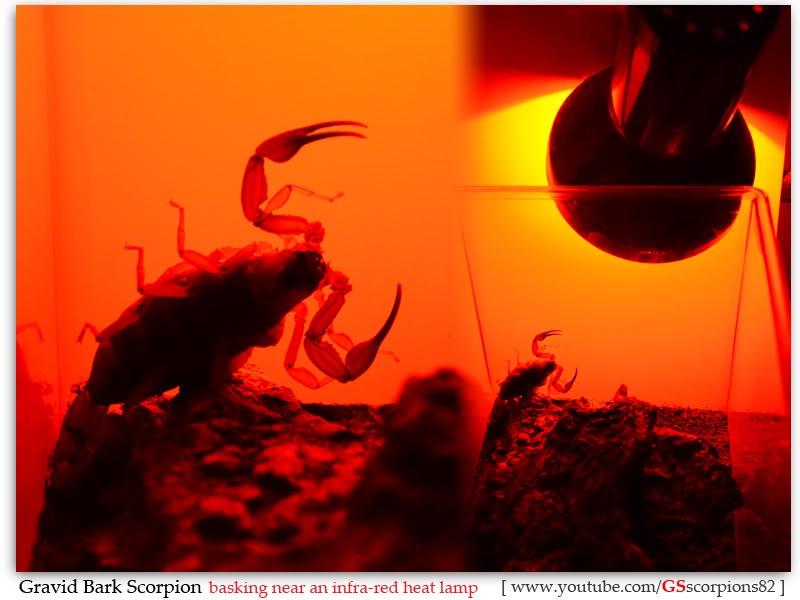 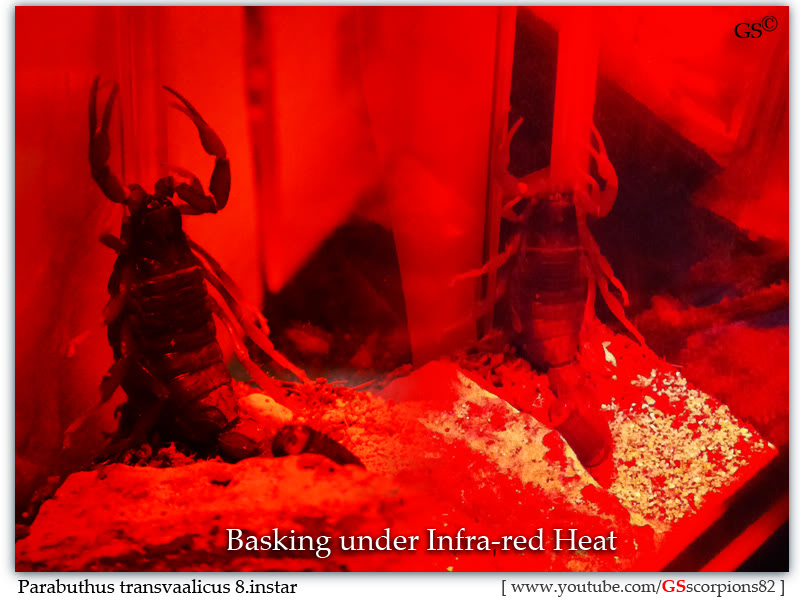 Optimal enclosure settings for a gravid female:
- Try to ensure a temperature gradient in the brooding enclosure with one side of the tank being cooler than the other.
- The "hotter" area can be achieved with a infra-red heat lamp
- A water dish should be placed at the cooler side.
- Once you are sure of your female being gravid, it is best to remove any other specimens which may be residing in the same setup
- While we will like to fatten up a gravid female so to ensure ample nutrients are available for the babies in side her
- My advice is not to have more than 3 roach left uneaten at any point of time
- Although bark scorpions may give birth while they are on the bark, an alternative hide on the substrate can be provided. This can be achieved with strategic stacking of bark pieces. 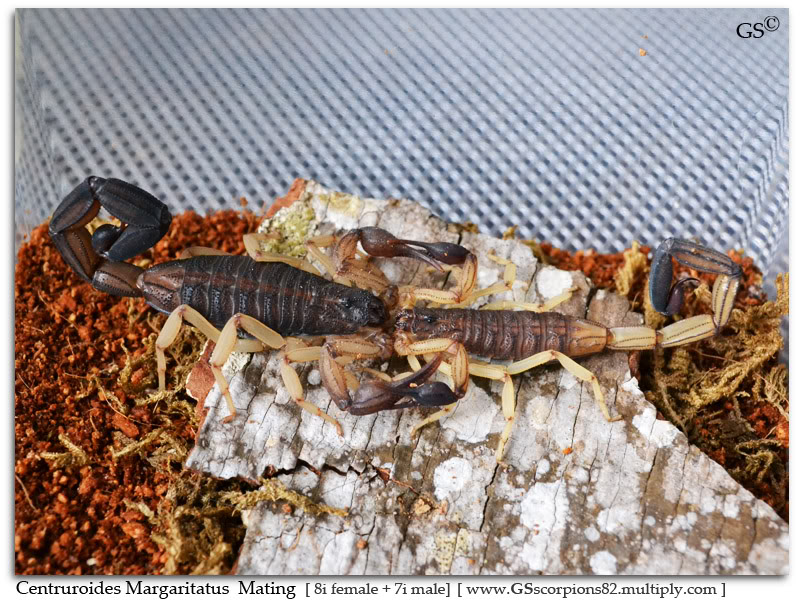 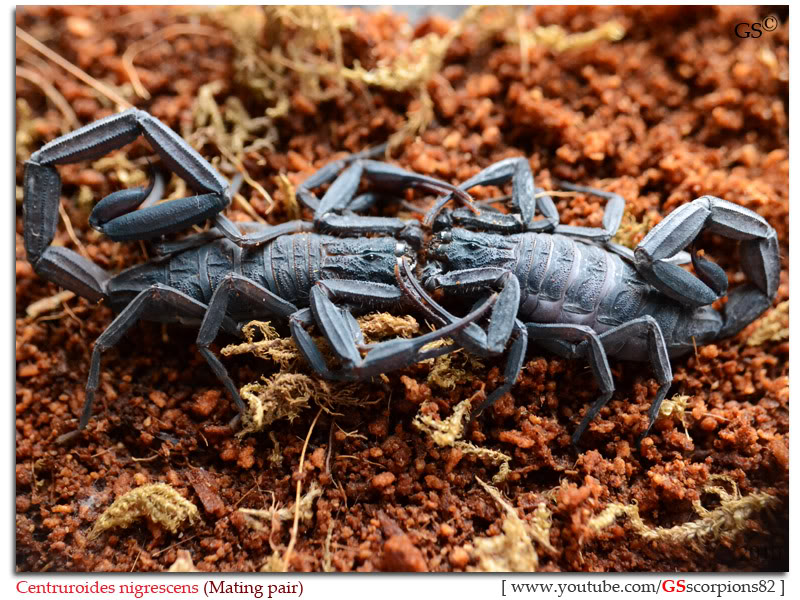 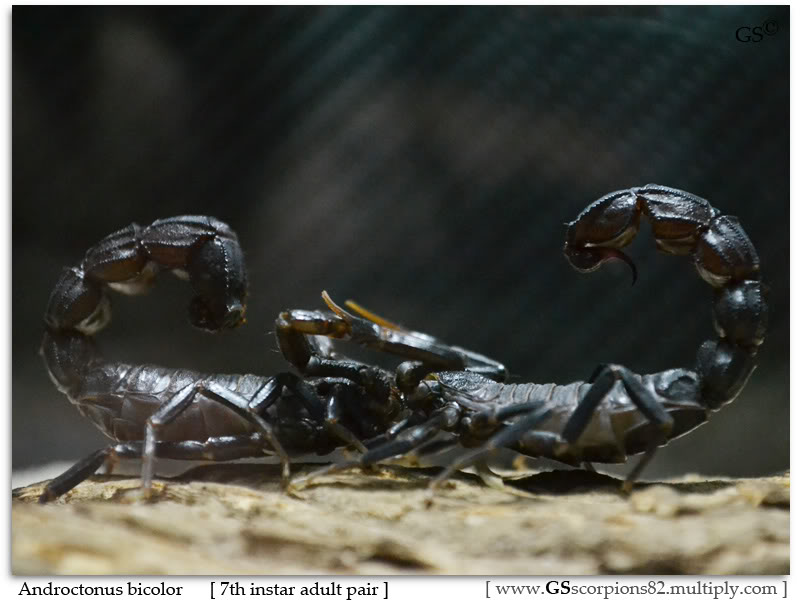 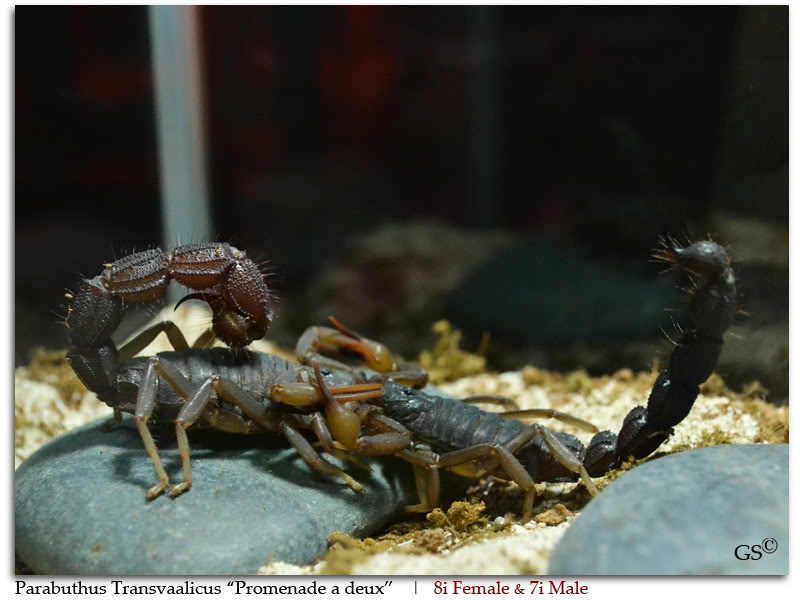 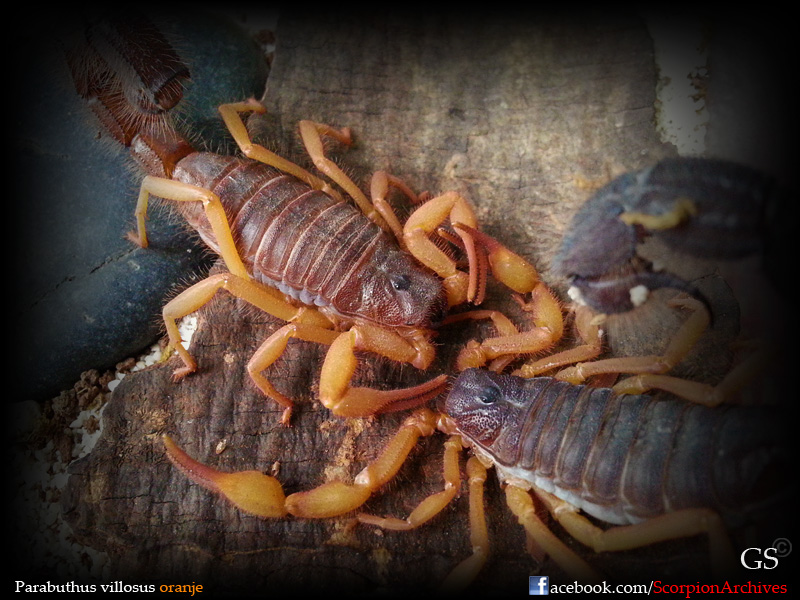 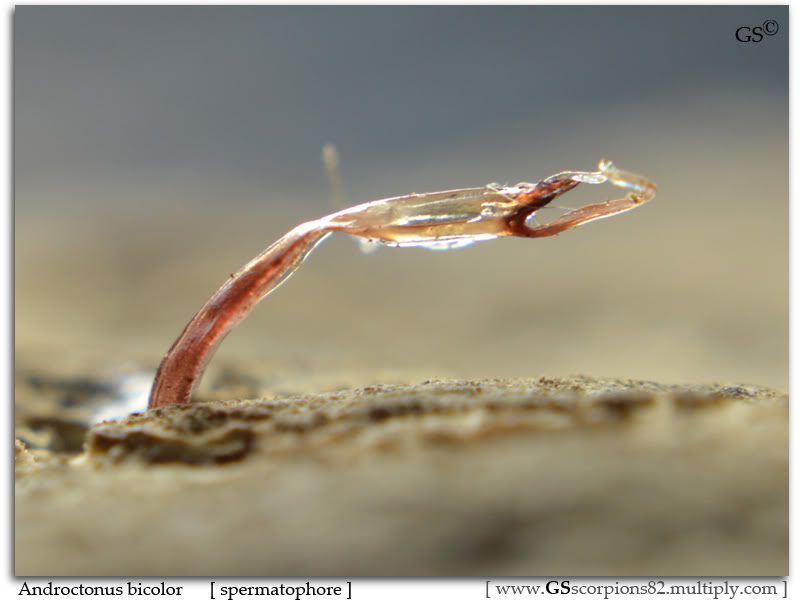 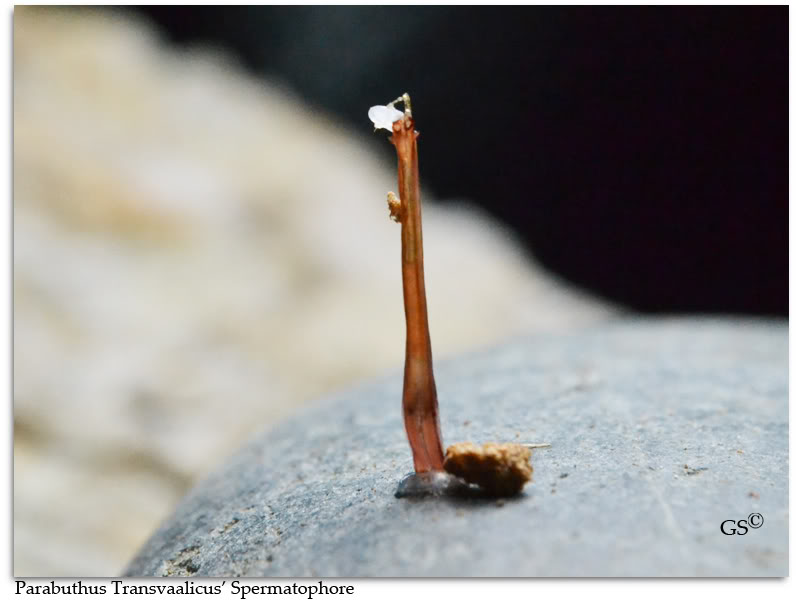 More info on [HOW TO] Tell if your Scorpion is Gravid:
http://www.allscorpionarchives.com/t15-how-to-tell-if-your-scorpion-is-gravid

I wish you luck in your breeding project

Epic!!! love it, great reference for me to refer for my next breeding project! thanks a lot GS bro.

Thanks bro. Glad it helped