[HOW TO] What is "MOLTING" and "PREMOLT" in Scorpion Context

[HOW TO] What is "MOLTING" and "PREMOLT" in Scorpion Context

MOLTING refers to the process whereby a scorpion removes it's old exoskeleton and emerges as a larger specimen. This process of "a new growth", marks an advancement in it's life-cycle. (e.g. A scorpion molts from 4th to 5th instar).

MOLTING only happens to immature specimens (e.g. juveniles to sub-adults) and a scorpion will cease molting once it reaches adulthood. Most scorpions molt four to six times throughout their lives. 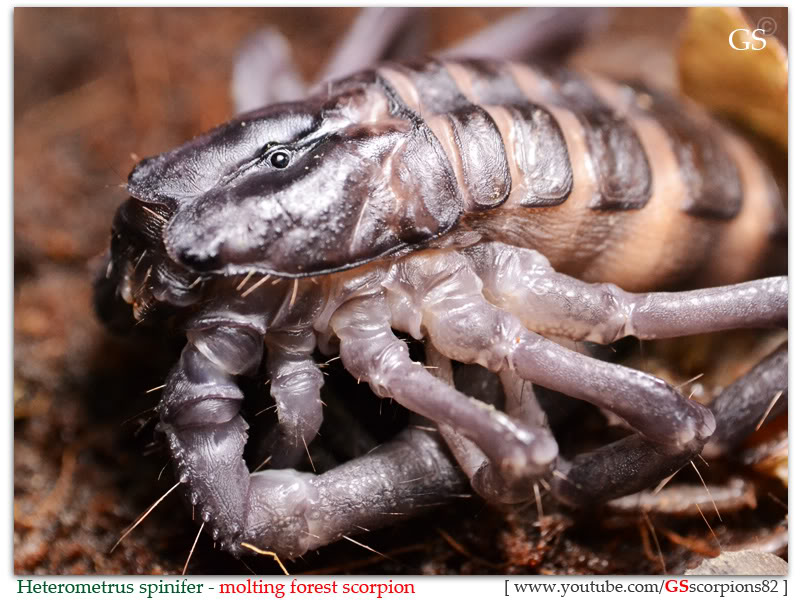 MOLT:
A "MOLT" may be referred to the exoskeleton itself. A sample as below: 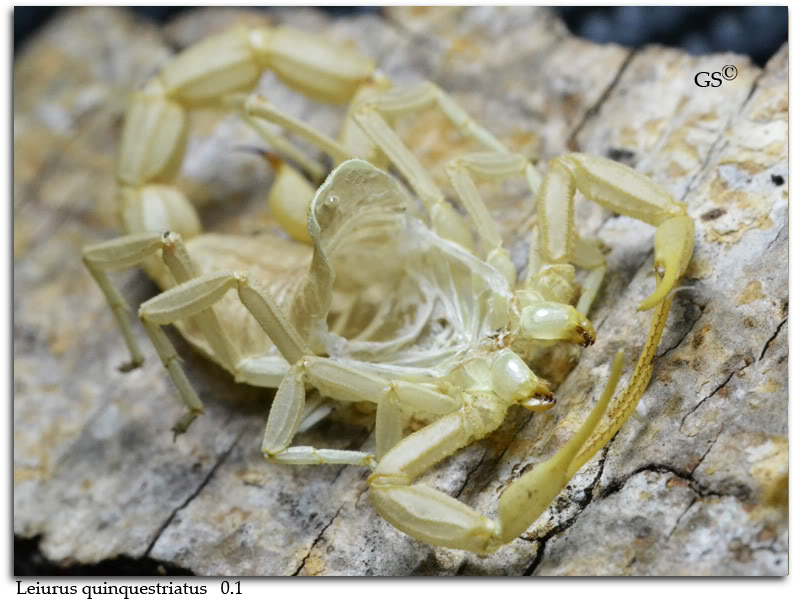 Molting Sequence of a Scorpion:

The following slideshows (from my photobucket) might not be visible for some smart phones. However, they should be viewable on desktop PCs. For those who are able to view them, please feel free to "play around" with the controls at the bottom of the slideshows to "control" the molting sequence. Have fun!

How far apart are molting intervals away from each other:

Please note that the above is just a rough gauge. The actual molting intervals is likely to be different from species to species. And it may be affected by the intensity of the feeding schedule and the husbandry provided.

Generally, specimens which are being kept on the warmer side of the recommended temperature range, would usually have shorter molt intervals between each instars.

Whenever you are expecting a molt, do not leave feeders overnight in the same enclosure with your scorpion. While a scorpion is going through a molt, she loses her defensive "Armour" (exoskeleton) with the birth of a new "skin", hence making them very vulnerable at this point of time.

During this critical period while her fresh exoskeleton is going though the hardening process ( usually takes a minimum 1- 4 days ), they might be attacked by feeders which may result in casualty.

Incident of a cricket attack: 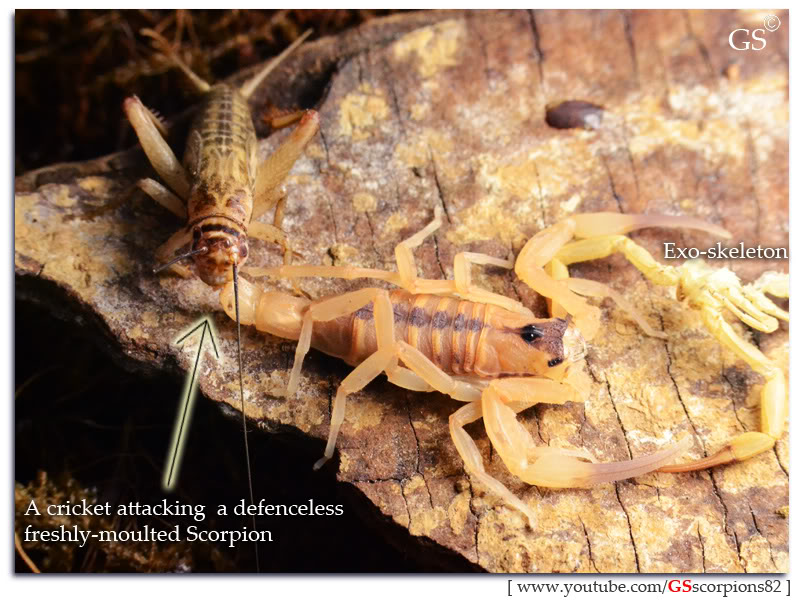 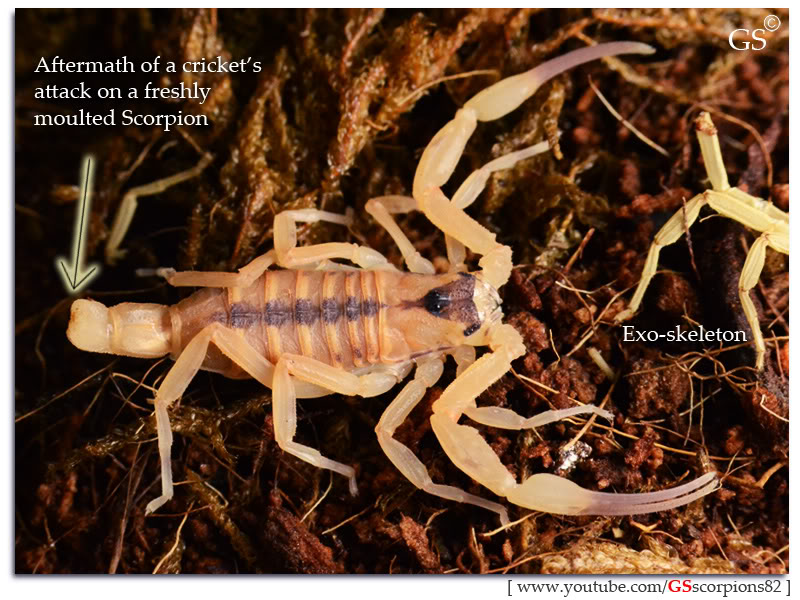 How long to WAIT before feeding a recently molted scorpion:

My recommendation is to to wait at least 7-10 days before offering them food.

They will NOT die from starvation during this waiting period while their chelicerae is undergoing the hardening process. 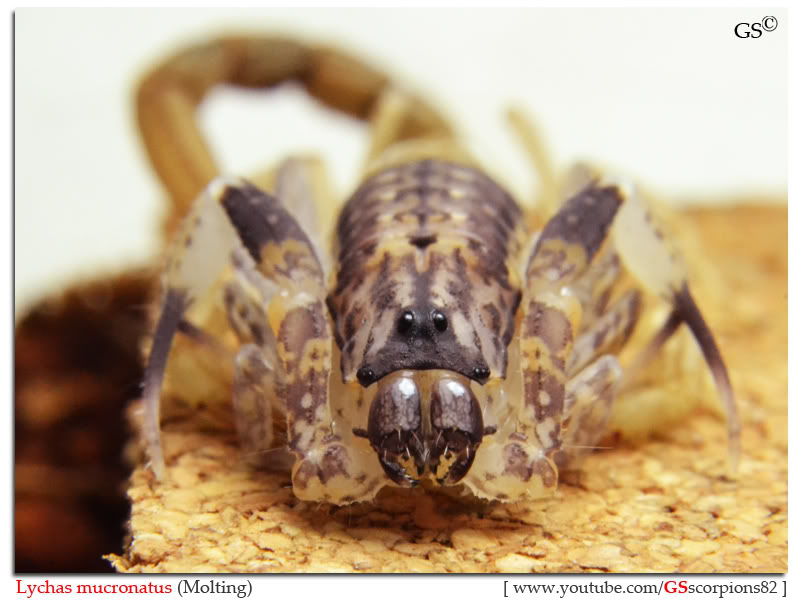 Now, we do not expect "new born babies" to munch on a cookies, don't we? I know we all love to watch them eat but lets just give them that little time.

During this "waiting period", simply ensure that you have maintained the correct husbandry for your scorpion and keep "disturbance" of any sort to the minimum. 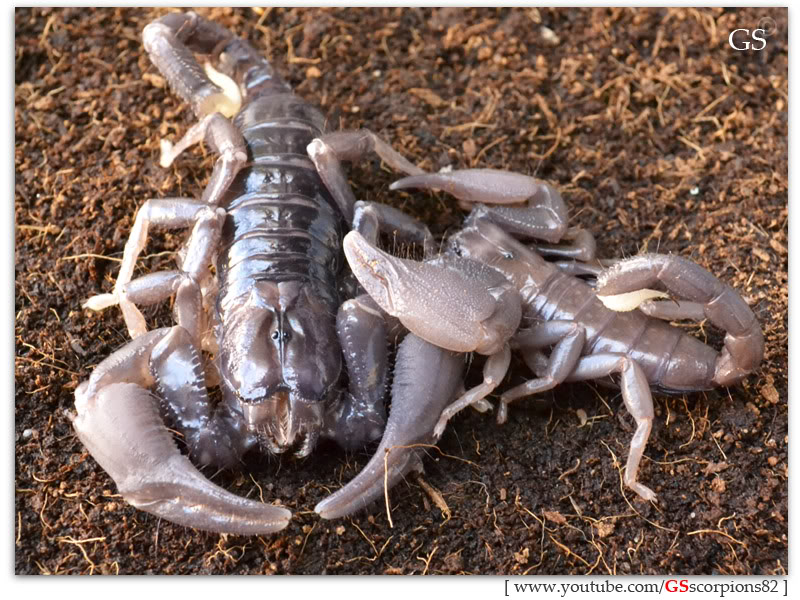 PREMOLT refers to the stage whereby a specimen is about to molt and I would say that usually, the period of 1-4 weeks prior to the actual molt can be referred as the "premolt phase". In some rare scenarios, a specimen may remain in this phase for more than 4 months.

A molt may occur in all life-stages (juvenile to sub-adult) of a scorpion except to an fully grown adult specimen which, will not be molting since it has reached the "peak" of it's life-cycle, so to speak.

Do not associate a FAT scorpion with "premolt" by simply looking at the physical appearance. A FAT scorpion does NOT equates a PREMOLT Scorpion. Yes, a scorpion in premolt phase would usually look quite plump up but "Fatness" is only one of the signs to identify a premolt scorpion.

The following is a sample of a FAT scorpion which stays in this "Fatness" (with regular feeding) before she molts to 8.instar 6 months later this picture was taken: 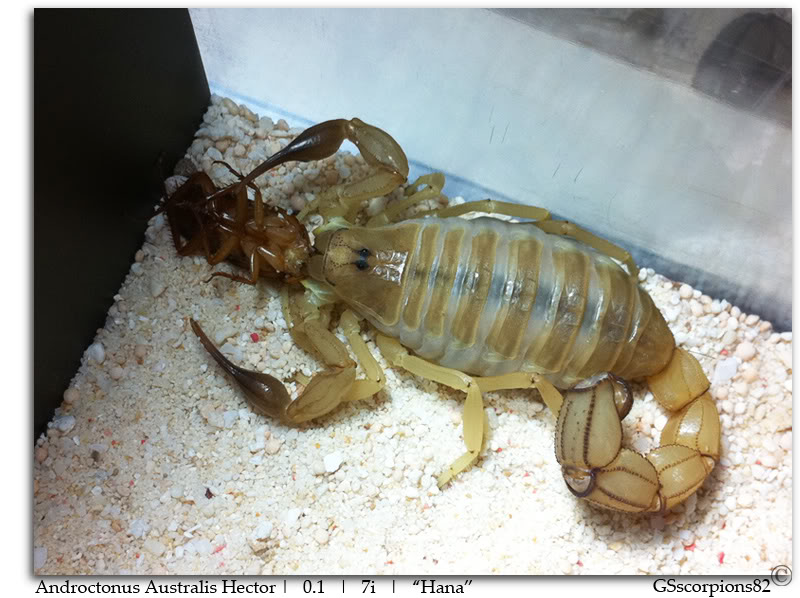 Some possible signs displayed by a premolt scorpion:

On normal circumstances, it is not uncommon for juvenile/ sub-adult specimens to feed continuously (when given the opportunity to) during it's "growing-up" phase. However, they would usually cease feeding prior to an incoming molt. Sometimes, it differs from specimens/ species on when(days/weeks prior to the actual molt) they would stop feeding. A rough gauge would be between 1-3 weeks (may be longer) prior to an actual molt. 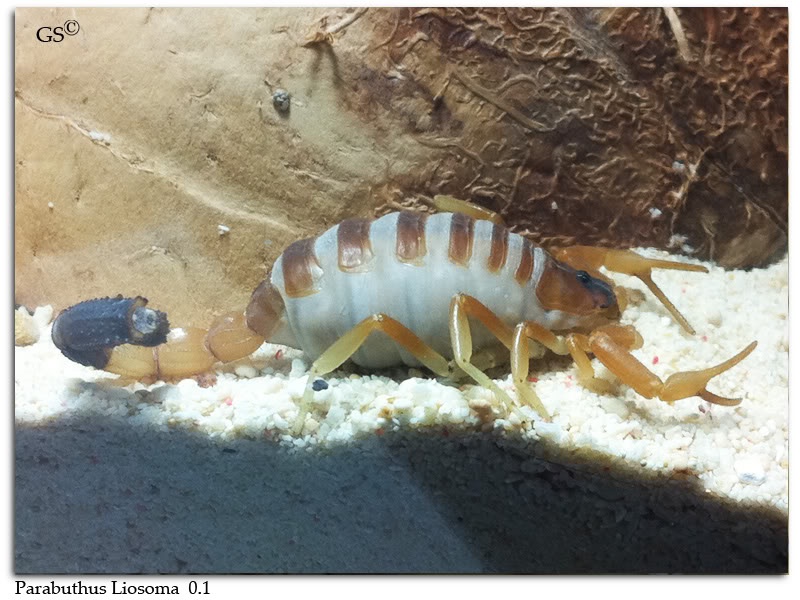 Yes, scorpions are nocturnal animals. During the day, they usually prefer to stay hidden, ambushing preys and staying out of danger and during nightfall, some of will venture out in search of preys, mate or simply patrolling around the enclosure to set up a defensive perimeter from it's hide.

However, for premolt scorpion, (even at nightfall) they would prefer to remain elusive and hidden from sight. As they will be undergoing a molt soon, to them, it's just not a great idea to expose themselves during this vulnerable stage of their life-cycle. Of course, there's always a few odd individuals who be comfortably just by staying out on the open substrate, in their "lethargic mode" 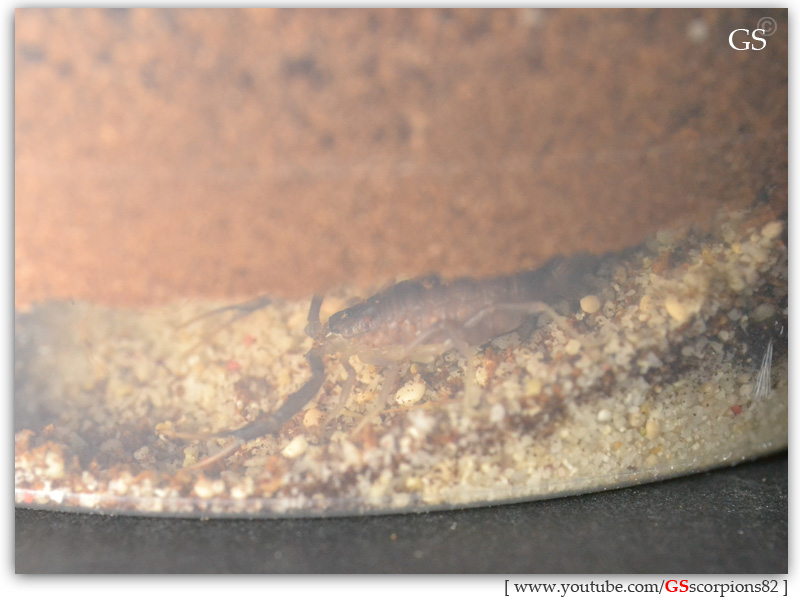 3. Lightening tone of the exo-skeleton

[spoiler]The specimen on the right is reaching the stage of premolt, notice it's pale coloration (in contrast of the specimen on it's left): 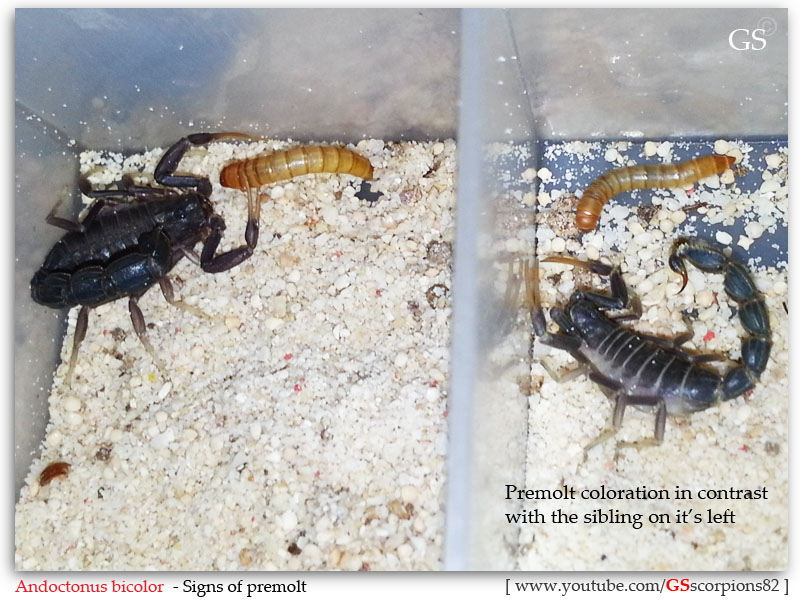 It is undergoing loosening of it's exo-skeleton: 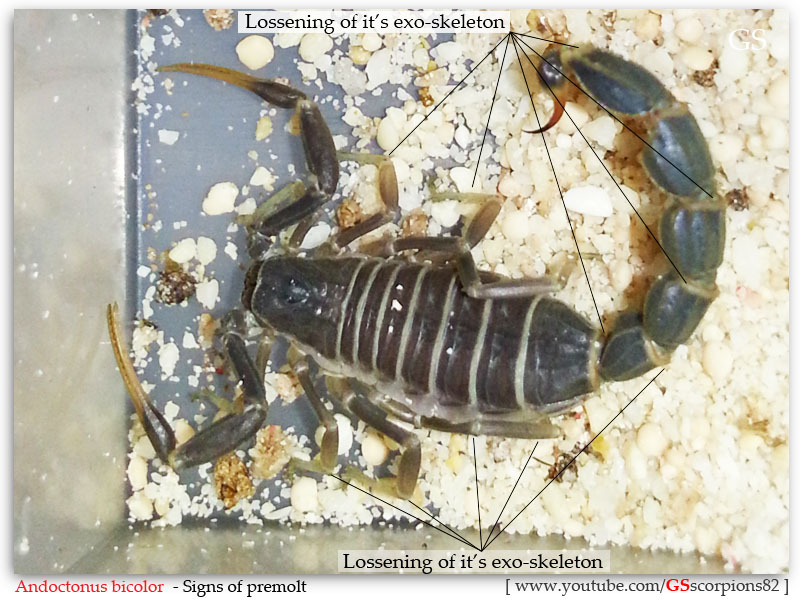 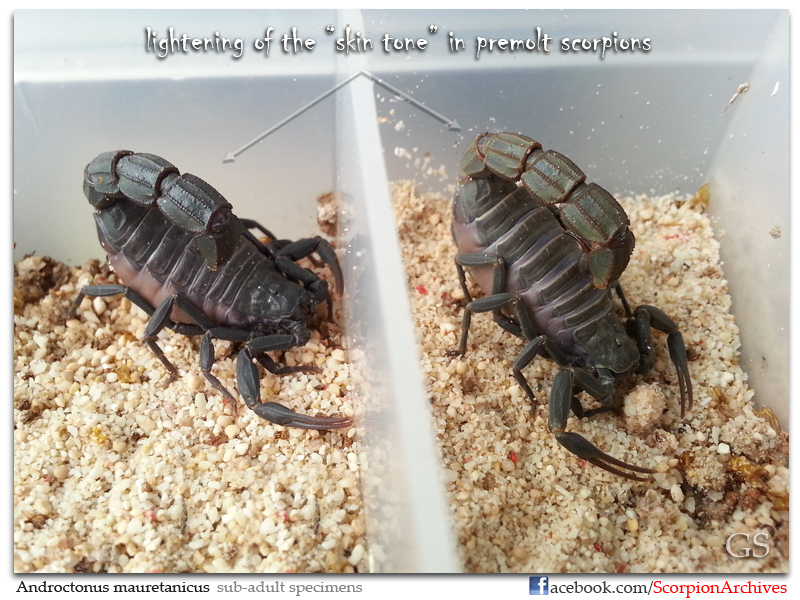 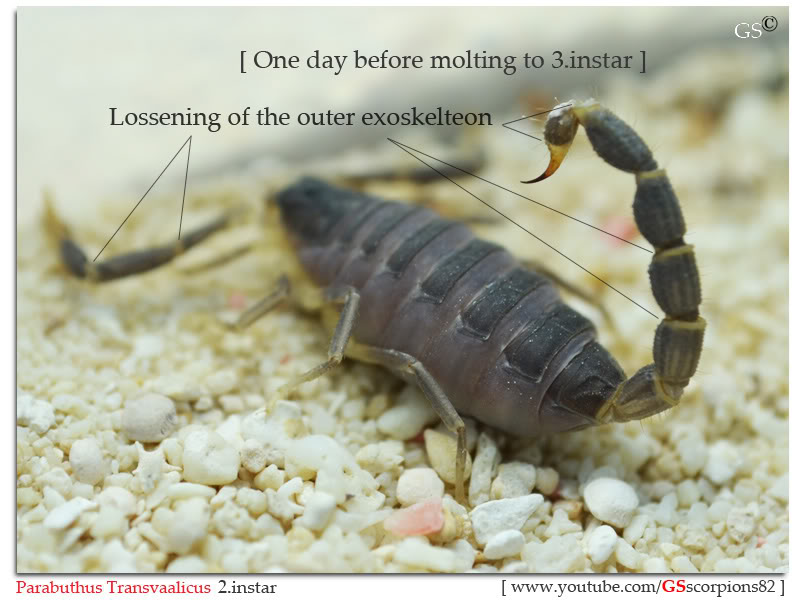 4. Flicking of it's telson as a warning sign NOT to get close

It reacts to possible threats by flicking it's tail in a irritably manner: 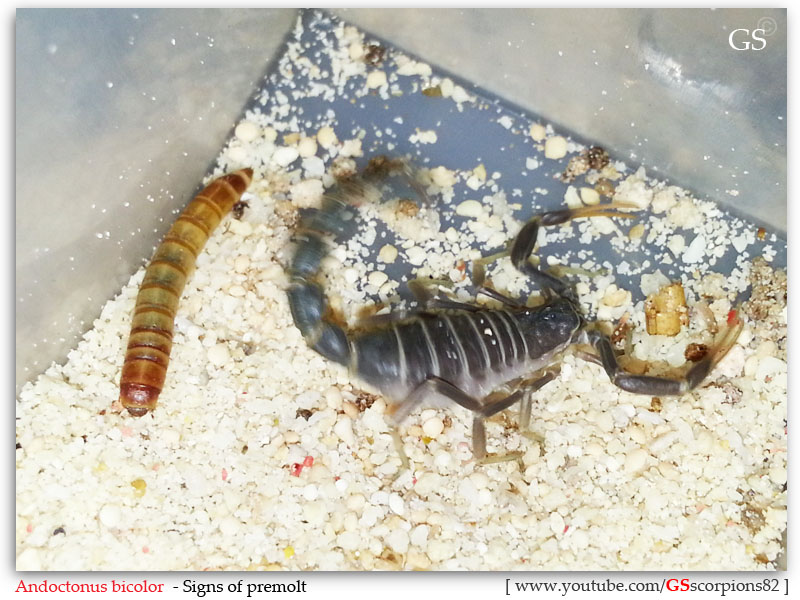 Unless you "poke it" gently with a stick, it prefers to stay in the same position. If she's disturbed, she will move away slowly. Agility is definitely not what you should see in a premolt scorpion.

Sample photos of Scorpions in Premolt 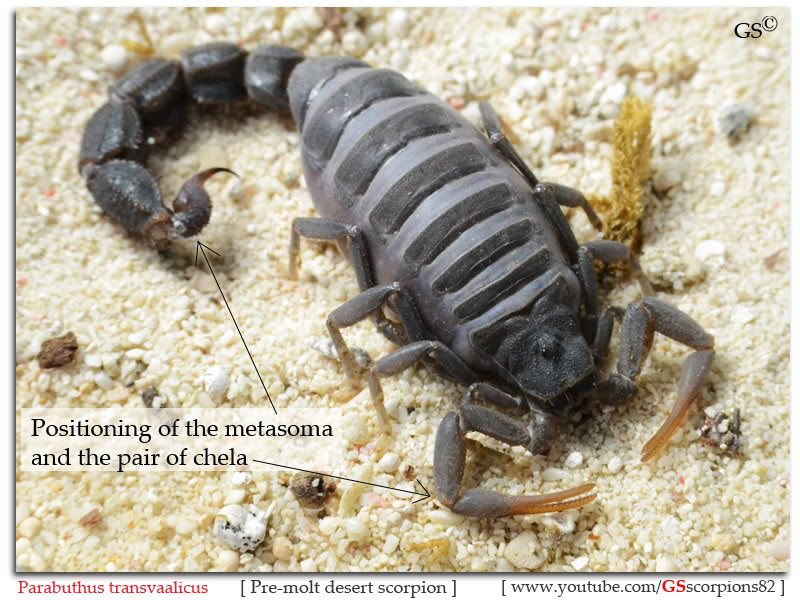 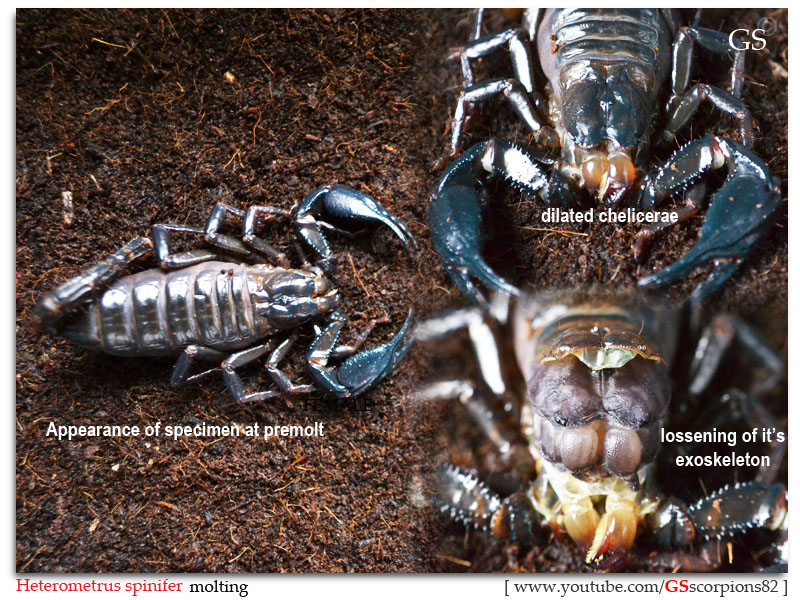 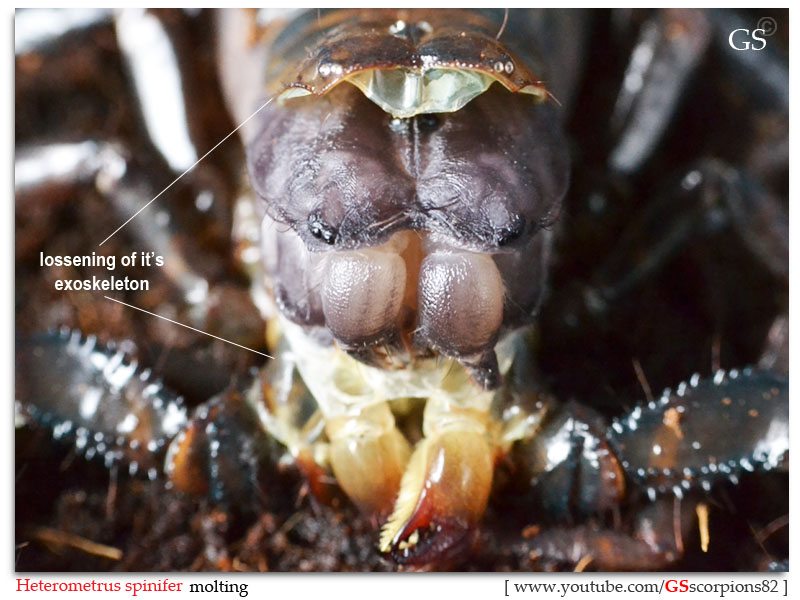 The above slideshow from photobucket might not be visible for some smart phones.

Feel free to click on the controls at the bottom of the slideshow to "hasten" the molting sequence. Have fun!

Here's the link to the picture album, just in case:

Please post your queries in the following discussion thread:

Similar topics
» What Do You Do While Your Chickens Molt?
» Composite Wood?
» AT Tyres Poll
» Beneficial Insects
» treated wood