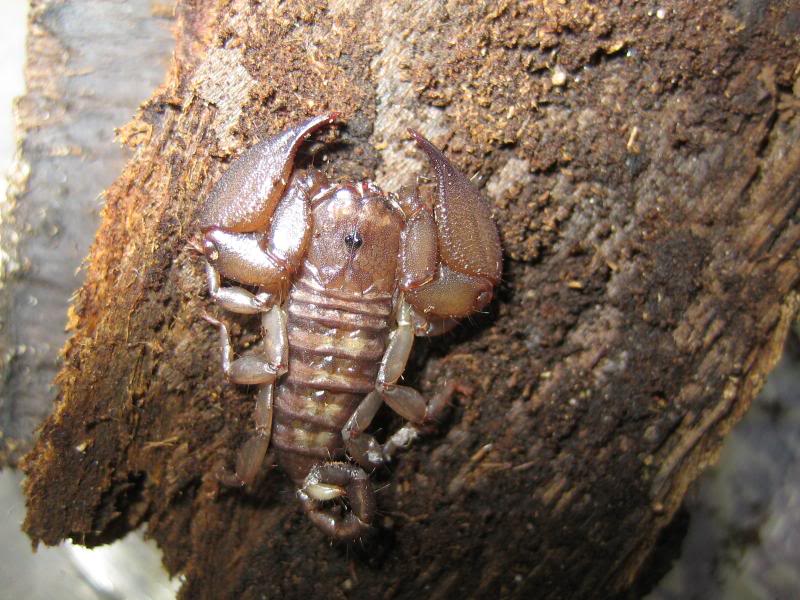 Another overdue post that has been ‘bugging’ me for awhile, no pun intended. I’m sure quite a few of you out there have occasionally come across some of these. They are virtually non-existent in the Malaysian pet trade since they are commonly encountered virtually anywhere in Malaysia, from suburban niches to primary rainforests. Like some scorpion species, these are parthenogenic and easy to breed as many of you may have experienced. 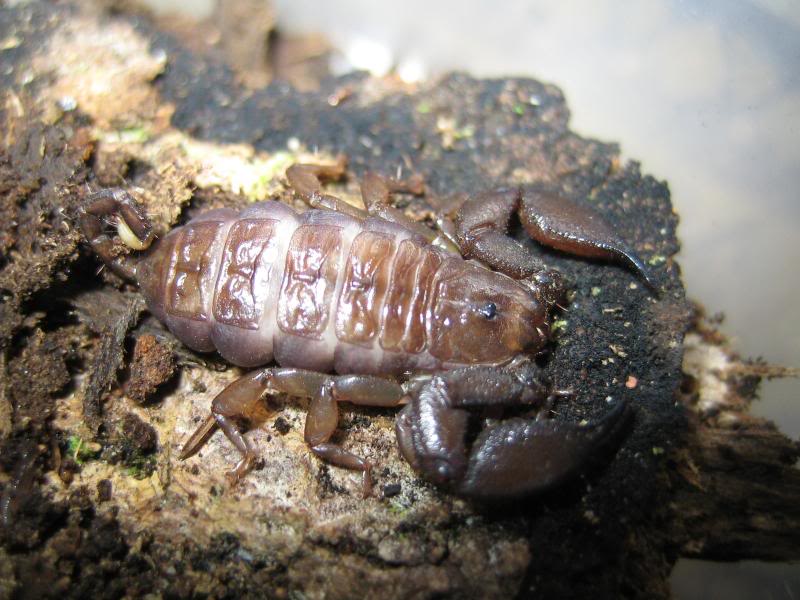 The one common dilemma commonly expressed is “how to feed scorplings of such small size?” especially when pinheads are not easily attainable. Other inquiries include the ideal captive conditions to encourage the development of embryos and consequentially partuition. This is based on my personal experience consisting mainly of trial and error experiments so I won’t pretend to be any kind of expert.

Optimal breeding setups
My first attempts were communal setups that emulated their natural habitat as best I could; narrow bark crevices in trees where I collected them in huge numbers. The barks were placed vertical as shown in earlier posts. 3 of the 6 adults I collected, gave birth not long after settling in but after 2 initial births, which yielded around 40 over slings in total, all reproduction ceased for an extended period of time; approximately 6 months. Additionally, incidents of cannibalism prompted me to try something different. 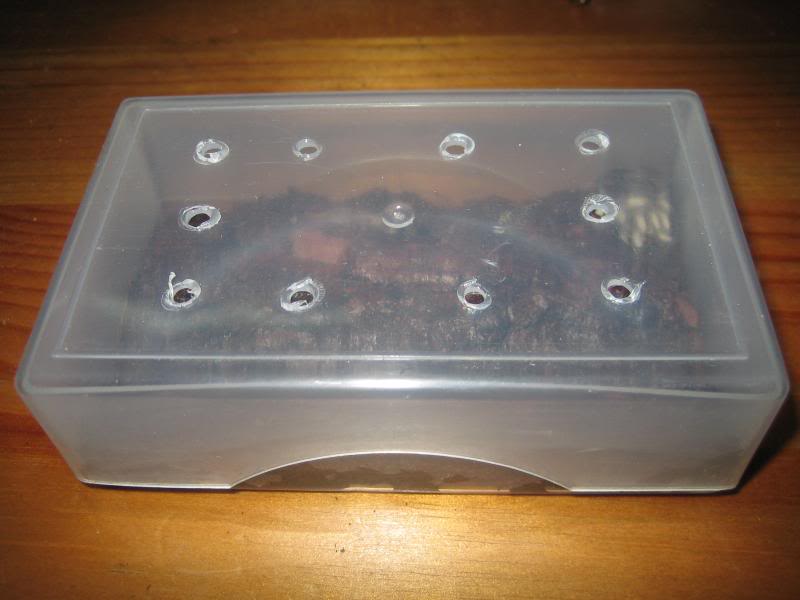 After trying cotton bud dispensers, which were more aesthetically driven than anything else, one of my adults popped in a temporary holding case fashioned from a business-card dispenser. This housing proved most conducive to prolific parthenogenesis. I think it has something to do with isolation as they seem more likely to breed in the absence of bothersome tankmates as their territorial natures would imply. It would seem that though often encountered living arboreally in vertical crevices, partuition seems to go better horizontally. The embryos are clearly visible underneath the tergites of this gravid individual. 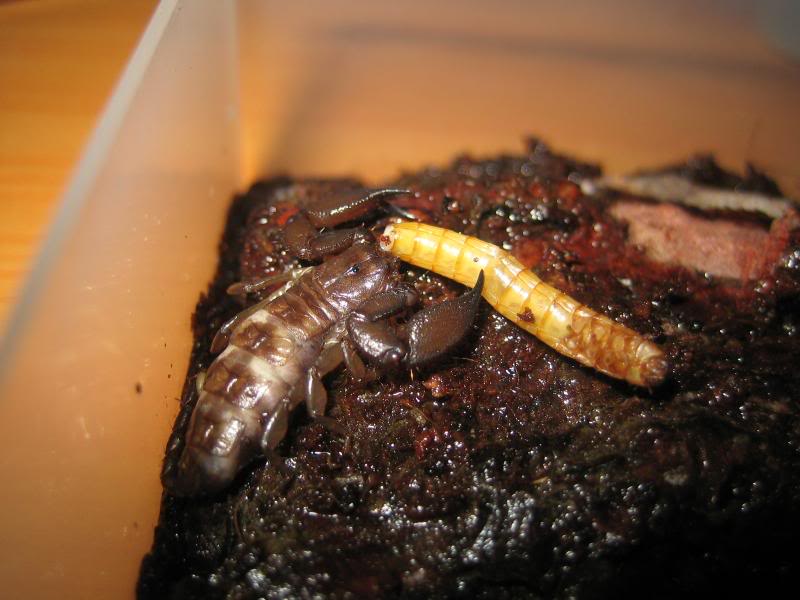 Once effectively isolated, gravid individuals are quick to birth. During this process, it is advisable to not disturb the mother by moving her enclosure, as they are quite sensitive and it may even halt the process mid way resulting in fewer offspring. 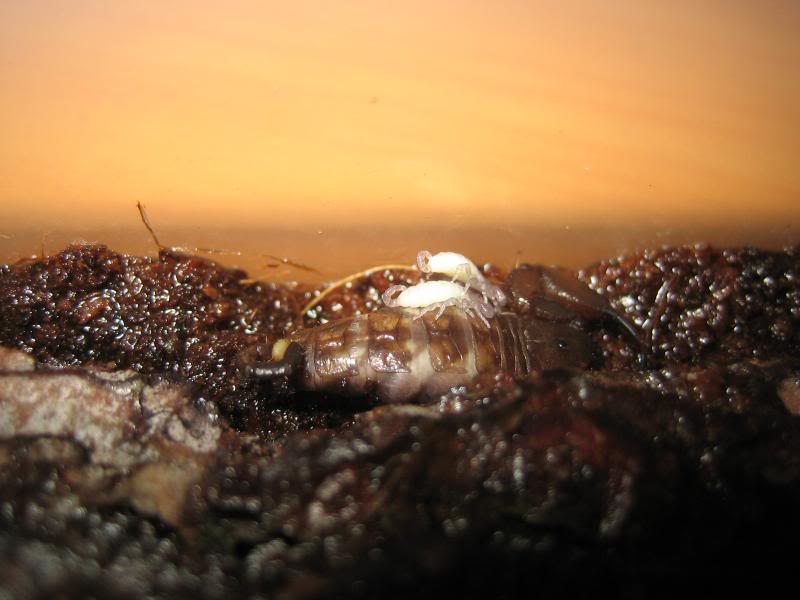 After realizing this one was birthing, I tucked her away and left her for a few days. 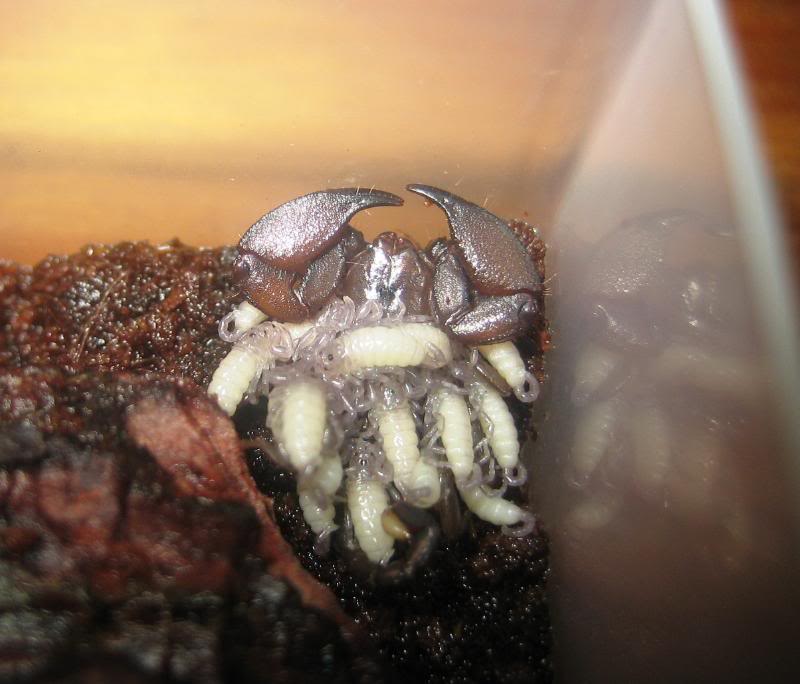 They may have broods of up to 40 babies at a time. Its ok to feed one mealworm at a time as the mothers will need to replenish the expended energy and thus will not feel compelled to consume her own young. 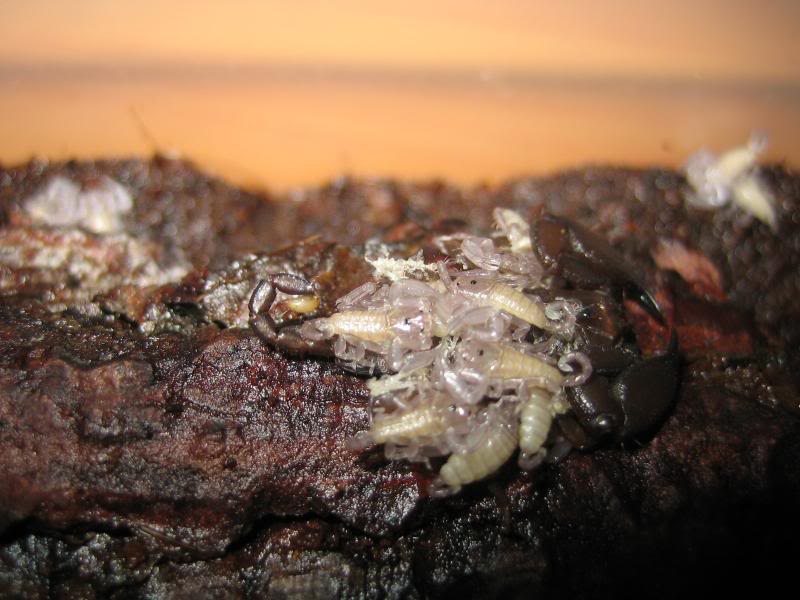 The young are quick to wean at 2i and stay nearby until as late as 4i or even 5i, so it is not necessary to move them any time soon. 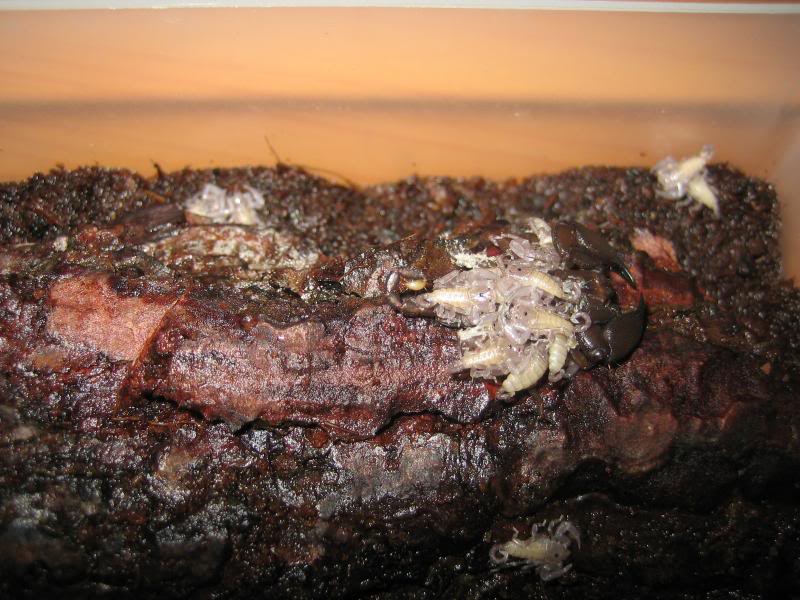 Young broods are cannibalistic until about 4i or 5i. Prior to this they may even work together to subdue larger prey like a small mealworm. 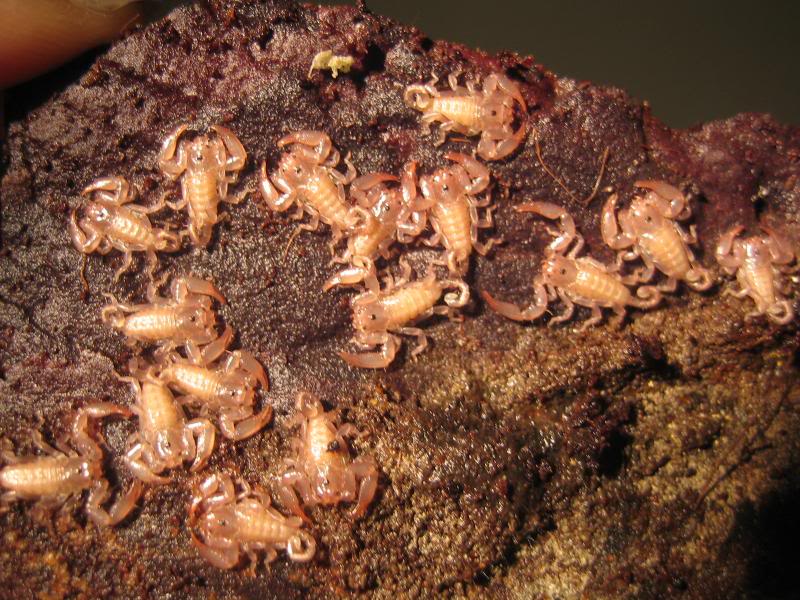 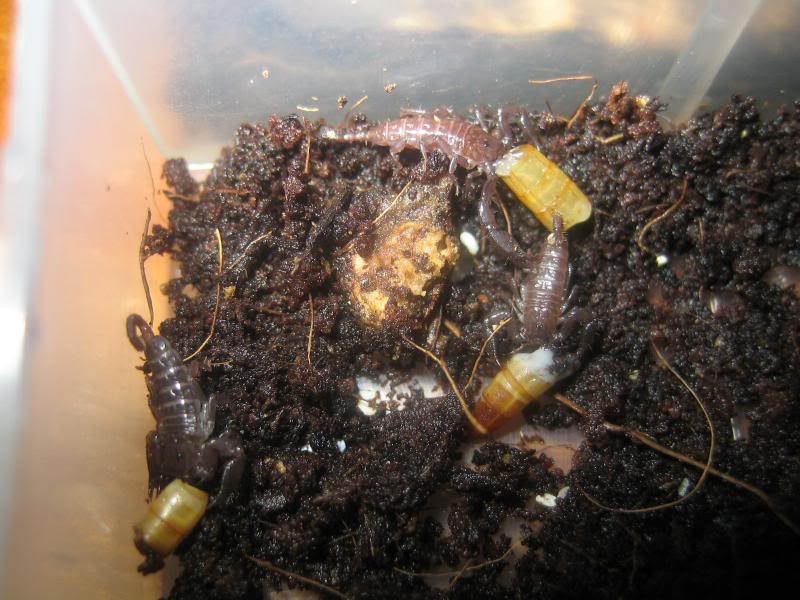 Don’t stress too much as they are unlikely to be crushed providing you replace the bark gently. They will no doubt taste the mealworms hemolymph stimulating them to feed. After a couple of times the scorplings will readily mob tossed-in mealies as the wriggle pass a line of tiny chela. 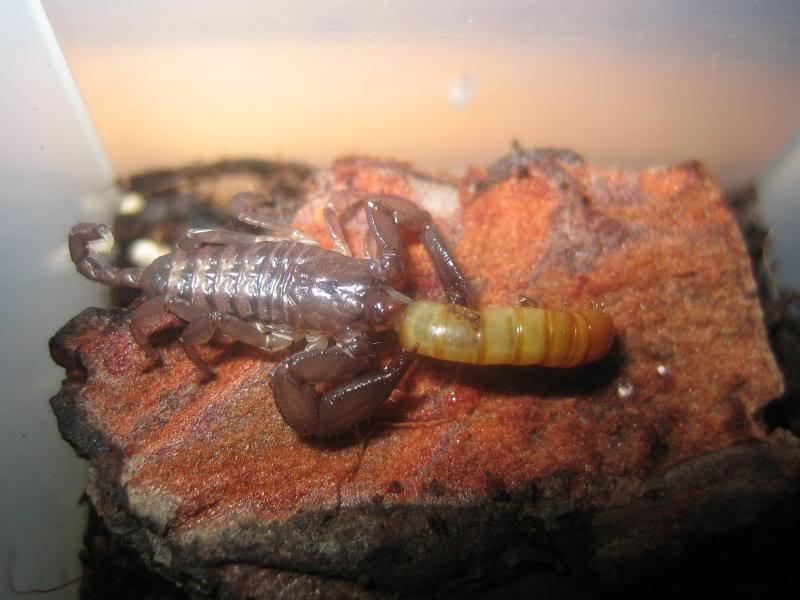 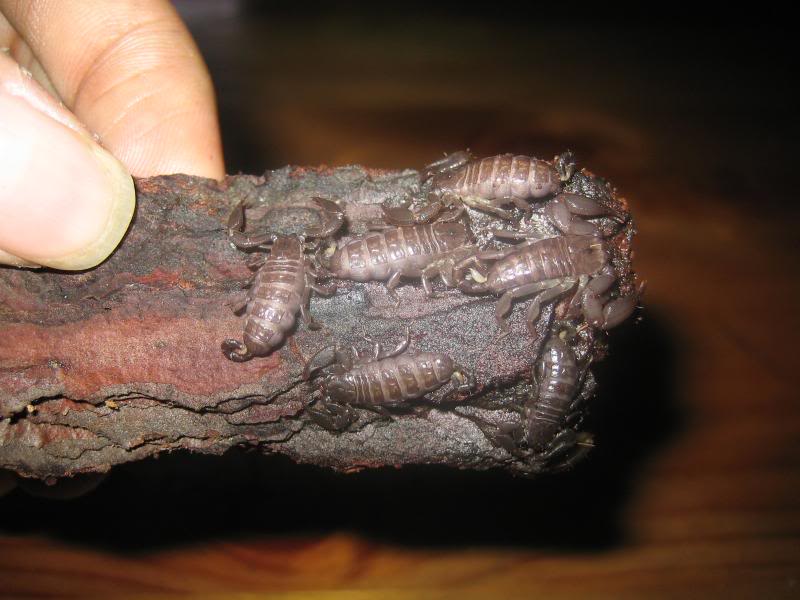 Though not particularly communal, scorplings are not inclined to cannibalism below 5i providing you give them enough food. 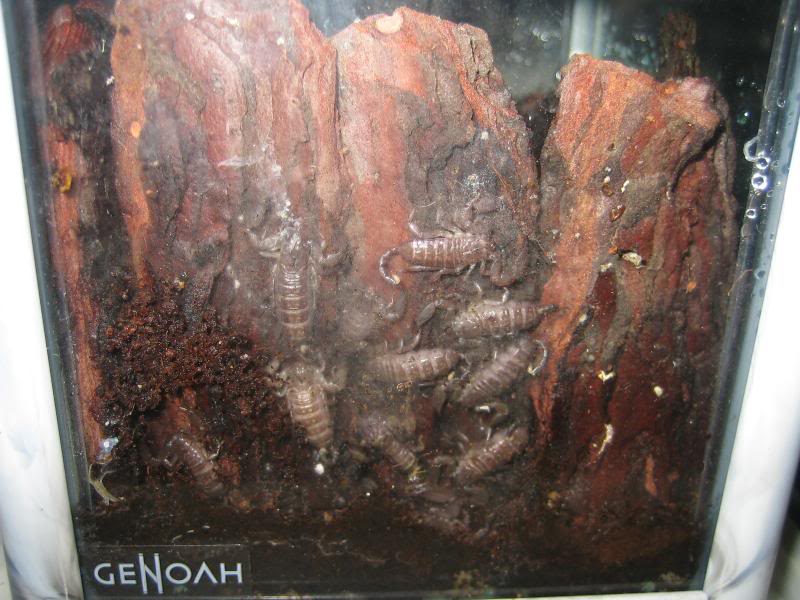 They will gladly clump together even with members that are not immediate siblings. 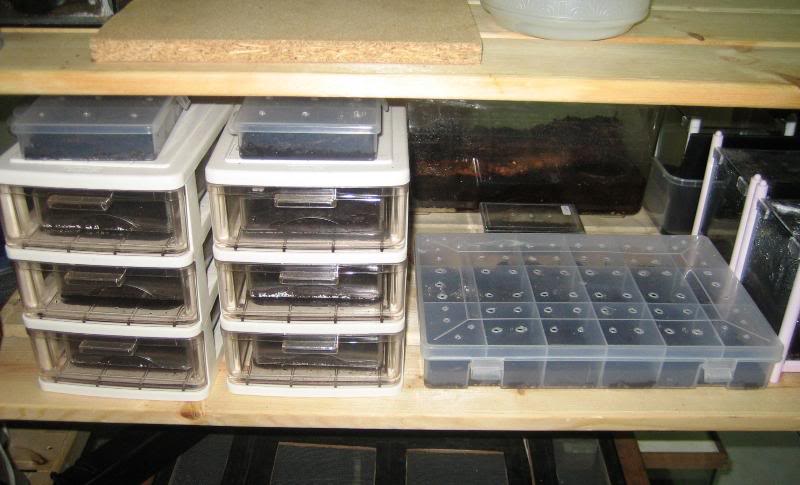 At some point, in the interest of monitoring growth rates and minimizing the event of occasional cannibalism, Individual housing is eventually the most ideal option. Feeding them however may take more of your time. 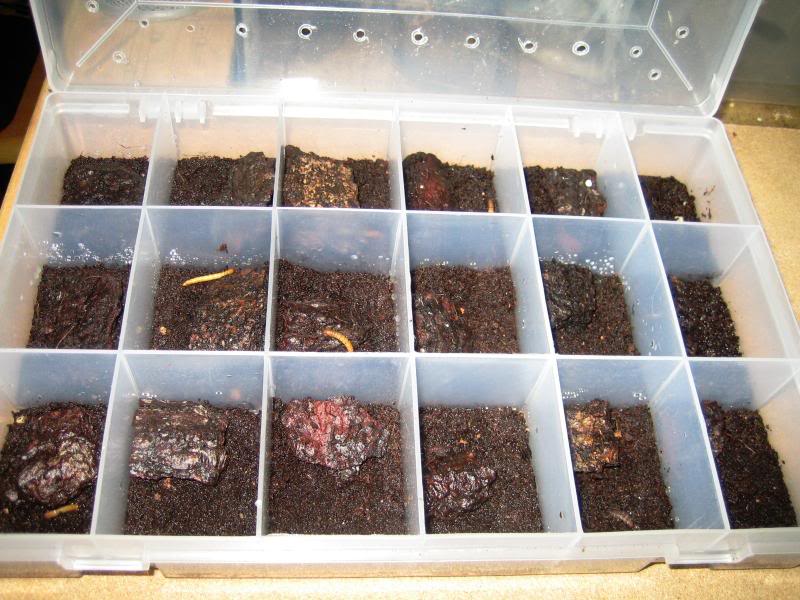 My sub-adults are raised in this multi-compartment storage case available at most hardware stores. I’m looking for one with taller walls and a clearer view. 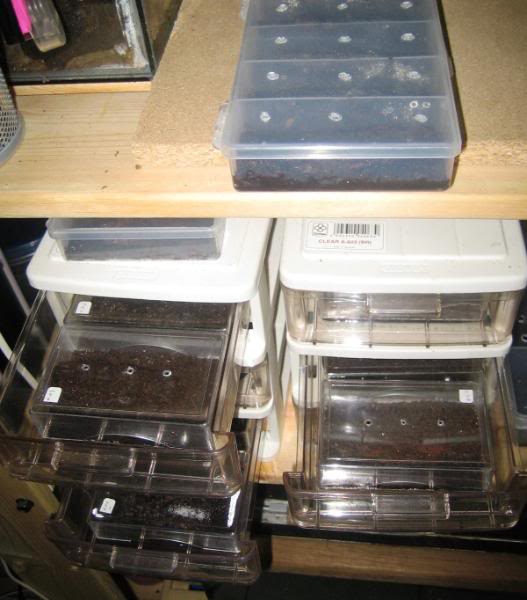 Adults of breeding age are placed in these individual business card jewel boxes and stored in two mini-drawer compartments that I purchased for messing around with.

Currently, my 1st batch of scorplings have reached adulthood and are pending transfer to their own apartments where we will see if they will produce the 1st gen of purely captive bred specimens. 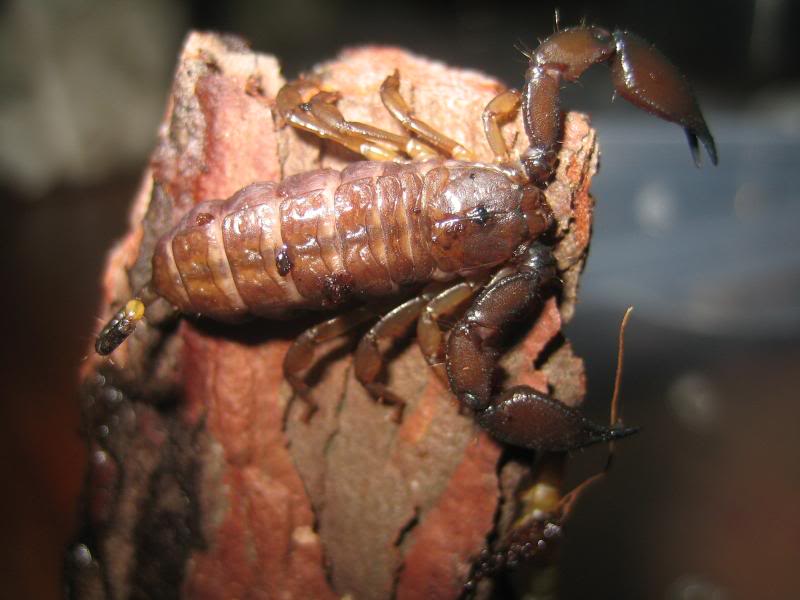 Phew, until next posts. Feel welcome to post comments and suggestions here, even pics of your own setups and colonies. I’m always eager to see someone else’s take on keeping these pocket-sized scorps. I’m considering having one on my office table in a small receptacle just to see if my colleagues will even notice it. 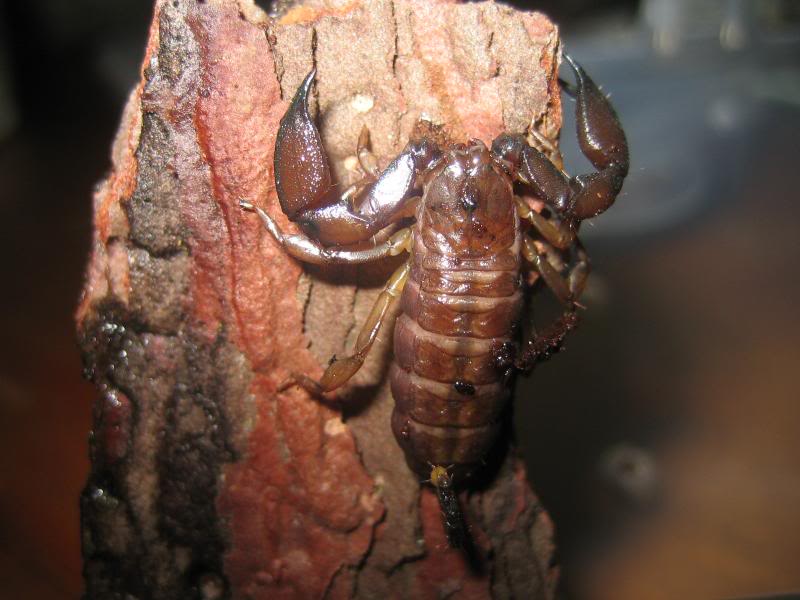 awesome!! they're always be my favourite! really nice micro shot! thumbs up!! 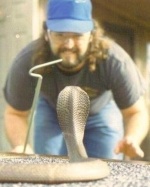 i have 15 pcs. what substrate do you use? it looks sticky and wet?

karamelonz wrote:i have 15 pcs. what substrate do you use? it looks sticky and wet?