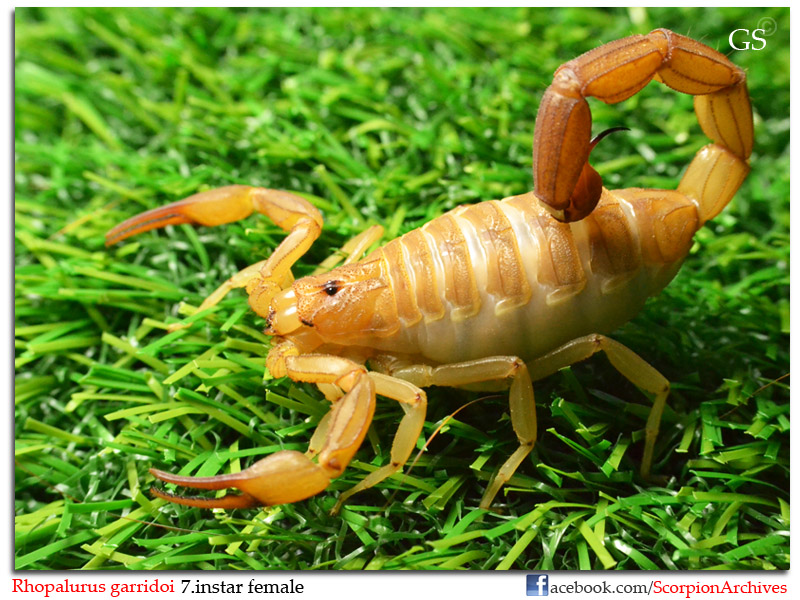 Introduction:
This Rhopalurus garridoi caresheet documents how I have been raising these magnificent looking bark scorpions. Under the conditions recorded below, my specimens are raised from young instar and later on, paired up as adults successfully. Thankfully, they have blessed me with multiple broods through generations under my care. Hence, i would like to share this success with fellow scorpions' enthusiasts in promoting pure captive breed & born specimens.

Appearance:
As compared to their "cousin", Rhopalurus junceus, R.garridoi have translucent legs at early instar and the their color morphs progressively towards a pale orange in color as adults. Personally, I love their colorings as the lighter coloring resembles desert species', similar to their adaptability to drier enclosure conditions. 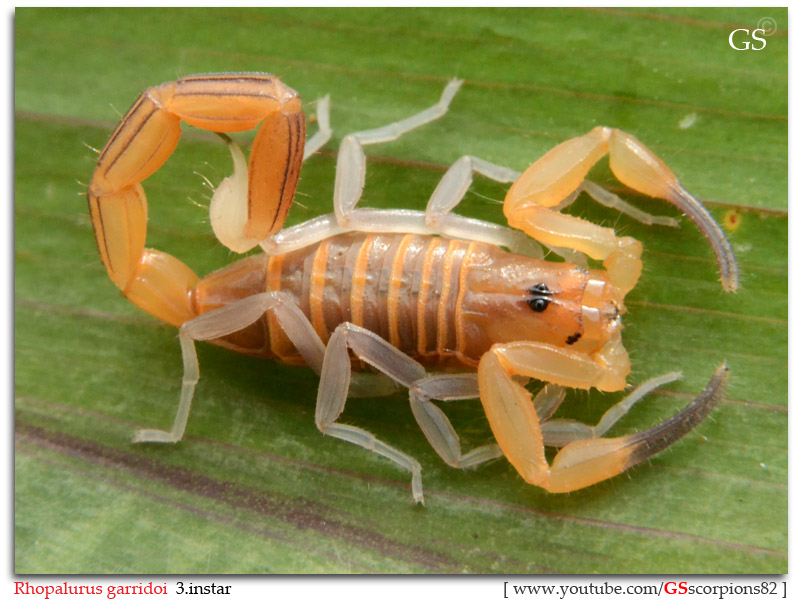 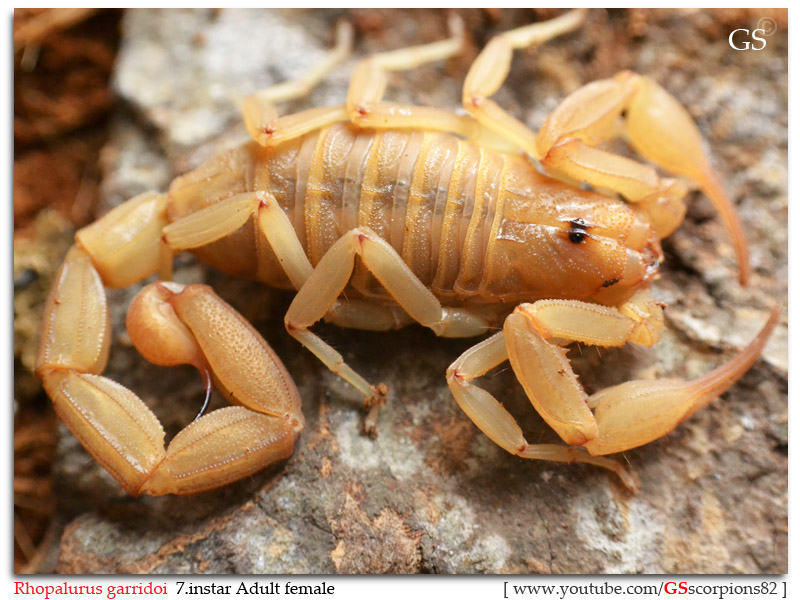 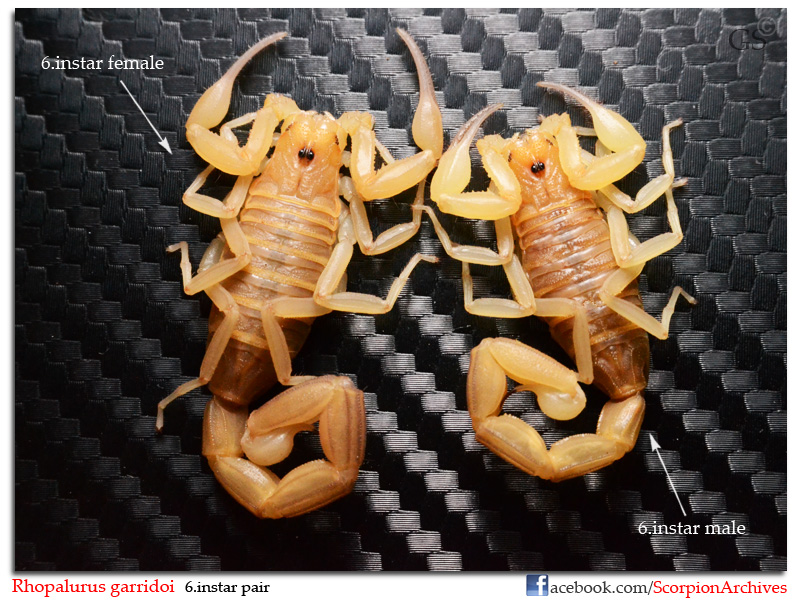 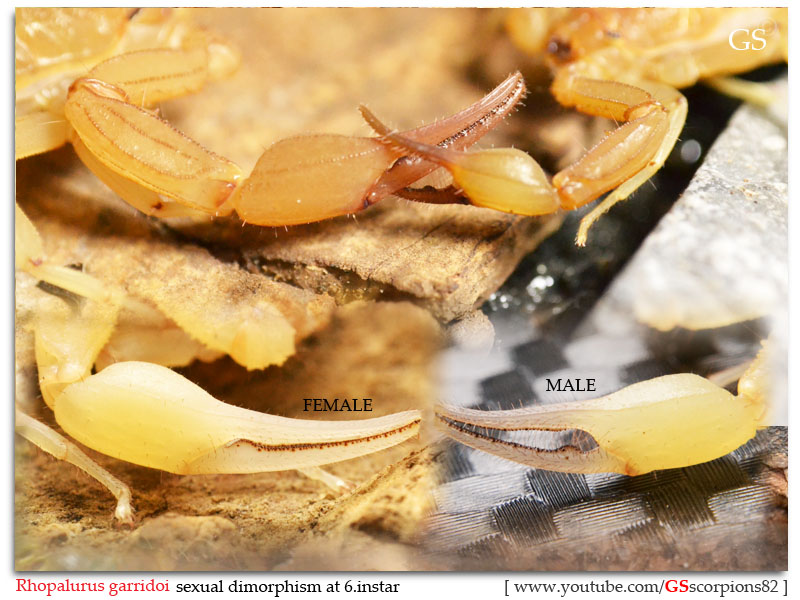 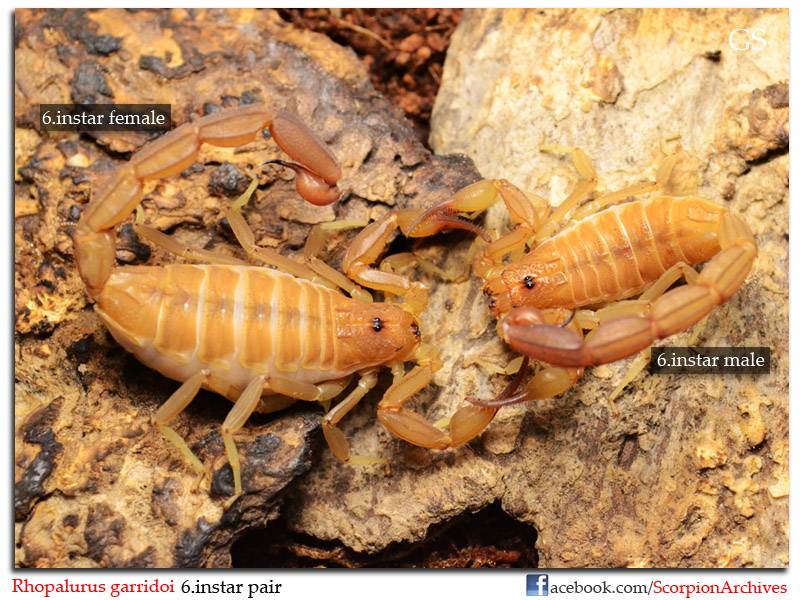 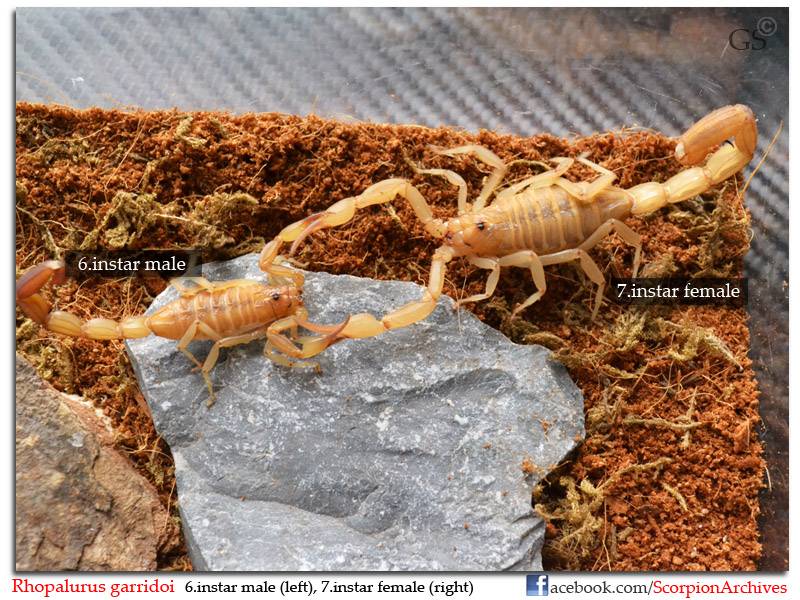 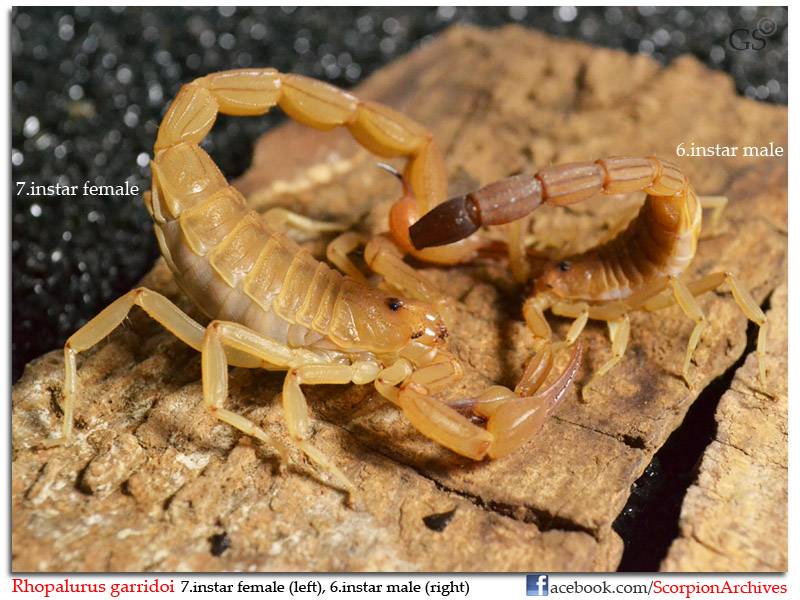 Video documentation of the mating occurrence: 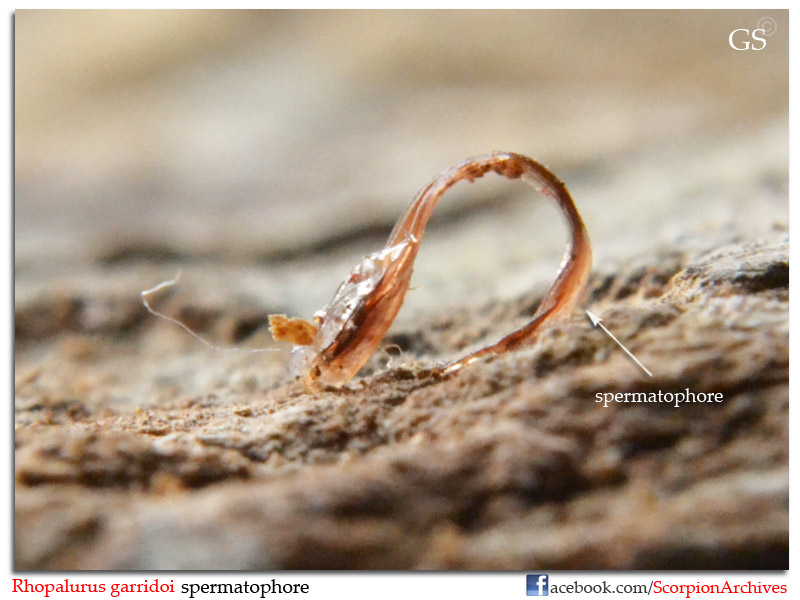 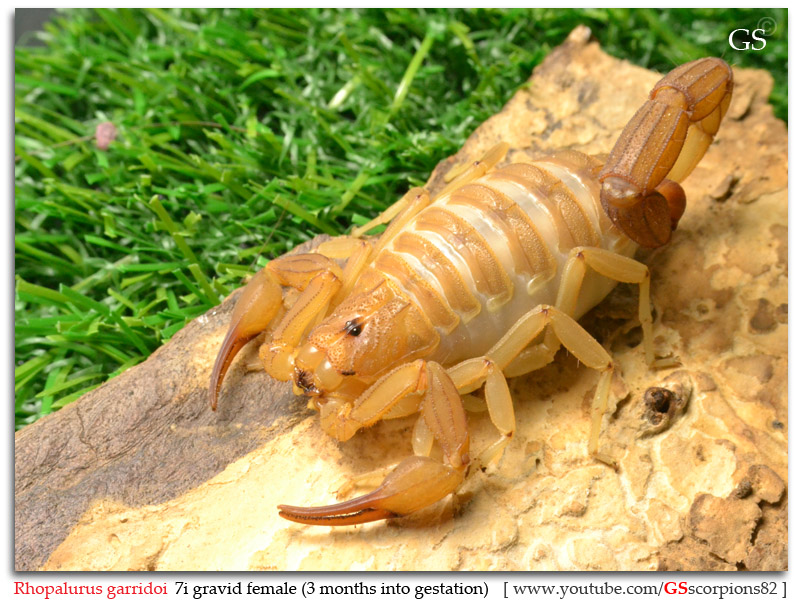 Factors affecting the gestation period:
Gestation duration may be affected by the conditions which the gravid Rhopalurus garridoi was being kept in. Generally, a rule of thumb is to keep her well fed and in the deal temperature suggested above. 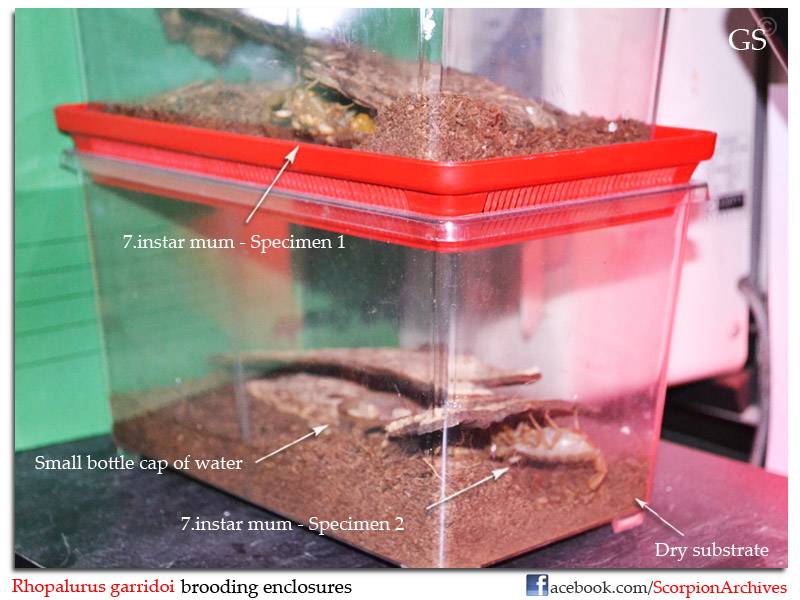 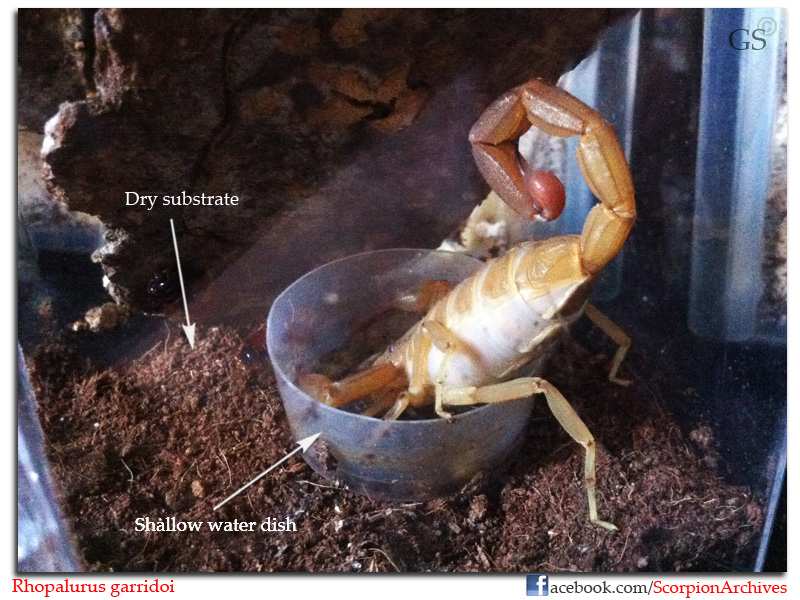 Documentation on signs of embryos:

Visibility of the embryos is clearly seen for a gravid specimens, usually highly obvious between 1-2 months prior to birthing. 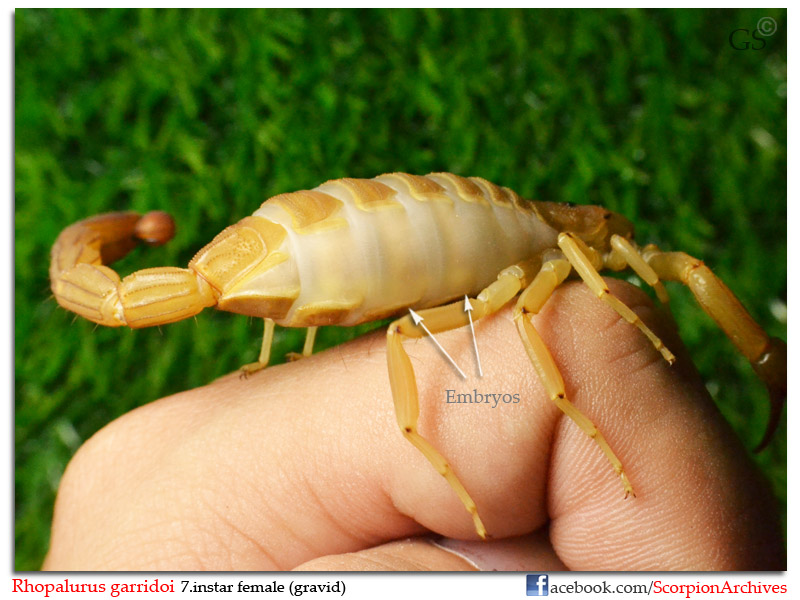 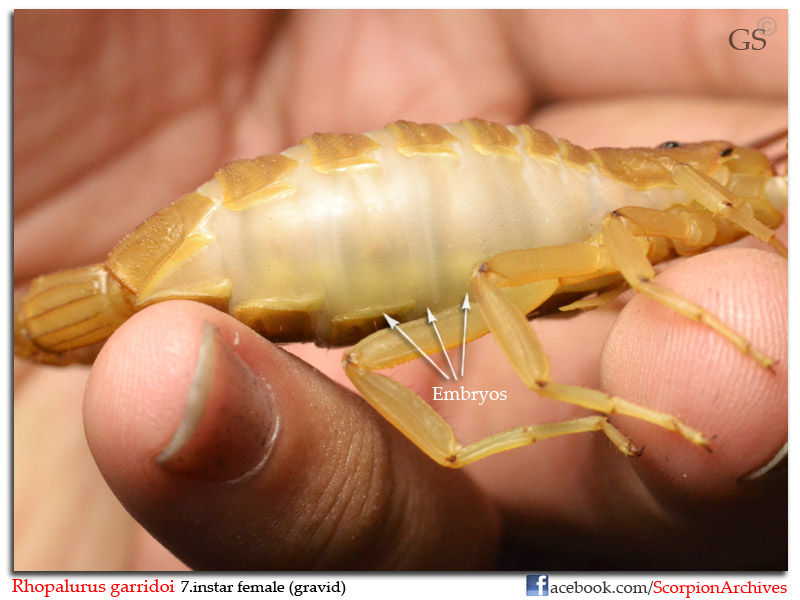 Measurement taken for the 7.instar mum: 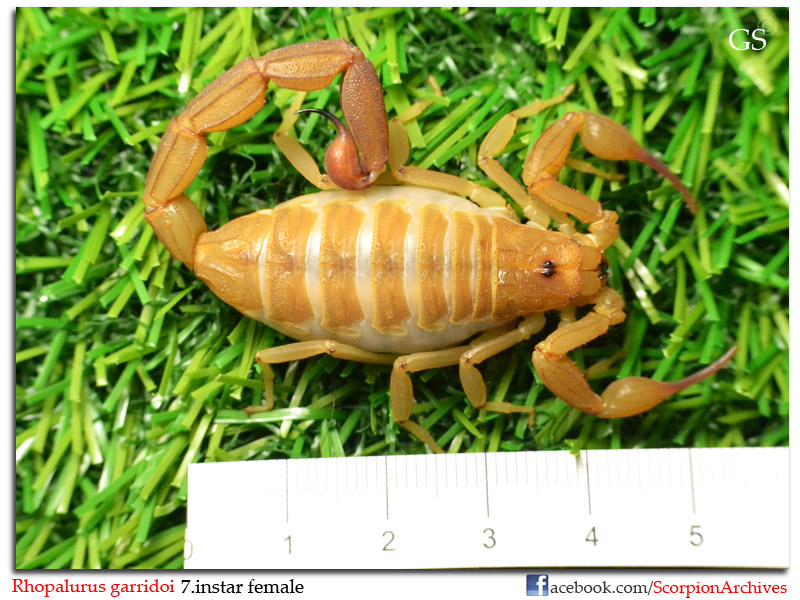 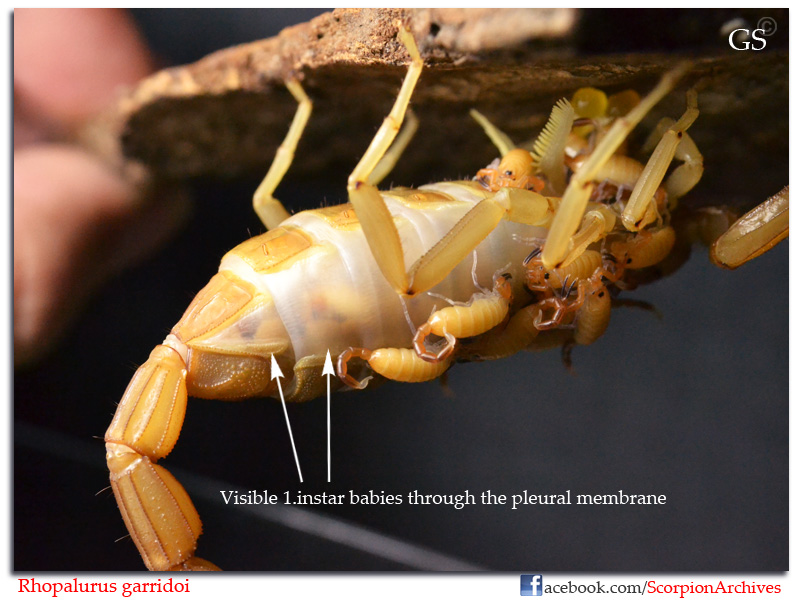 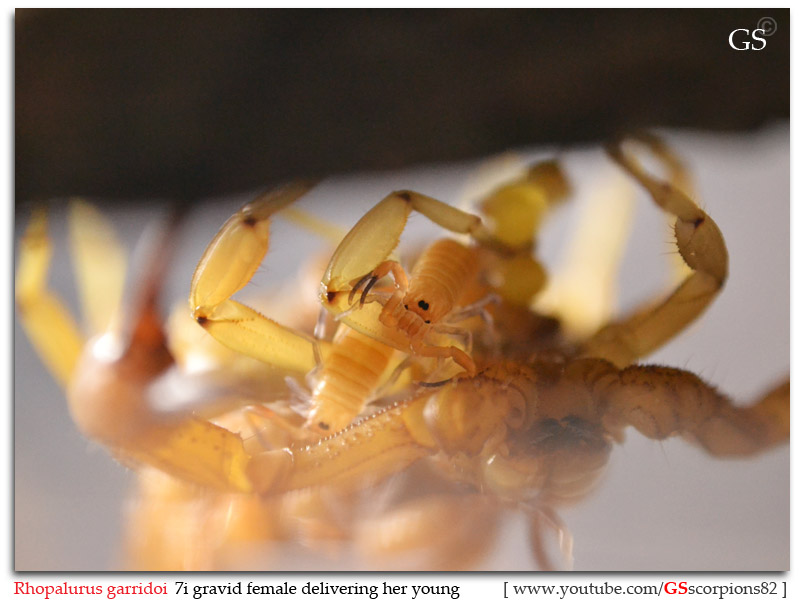 Double clutch of the 7.instar sisters who were mated around the same time. 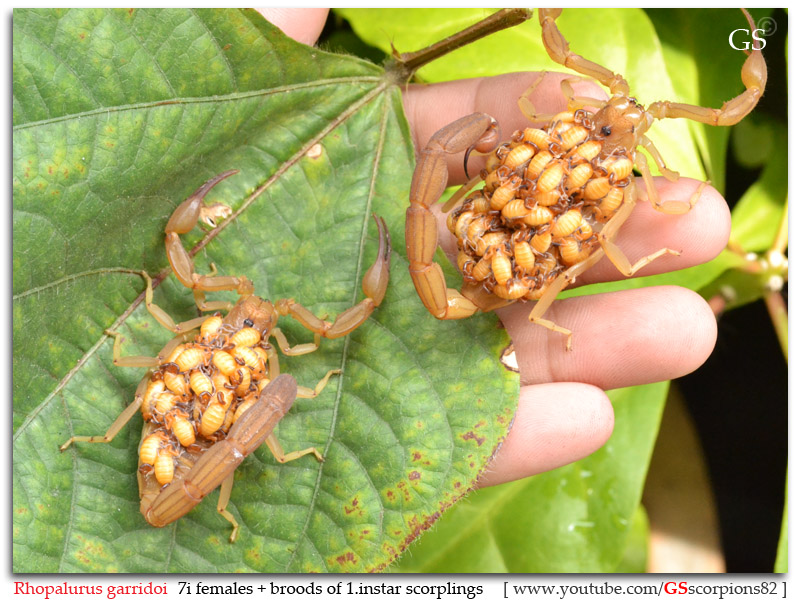 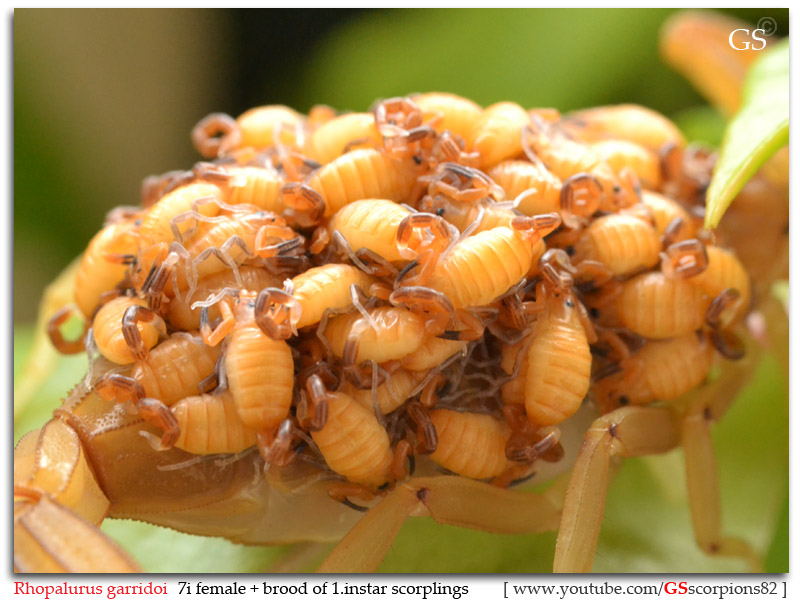 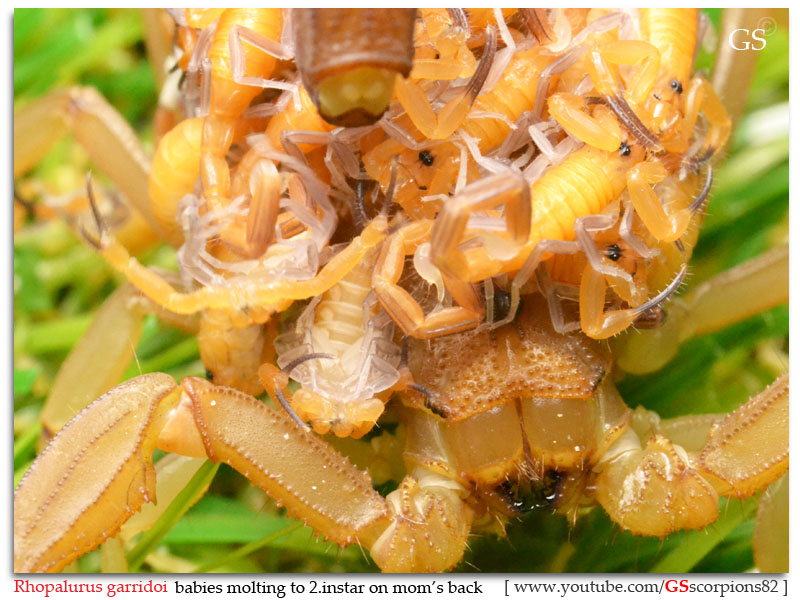 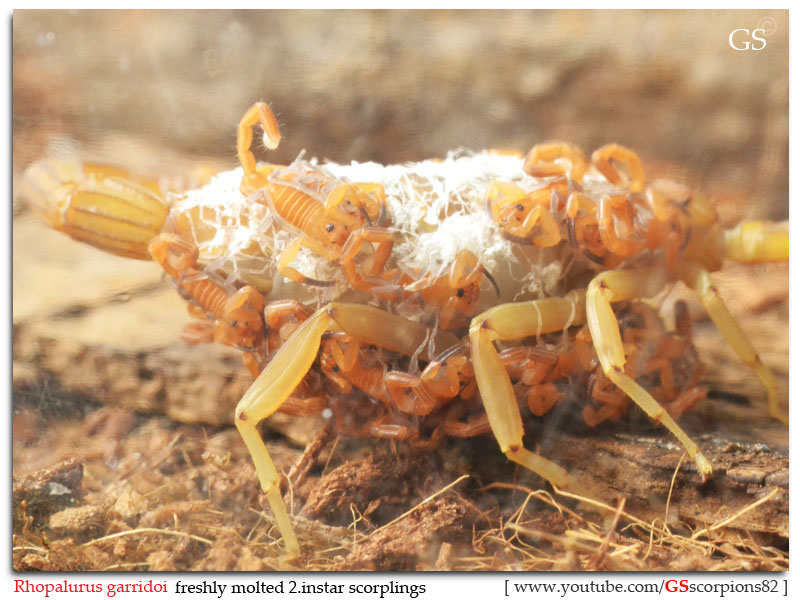 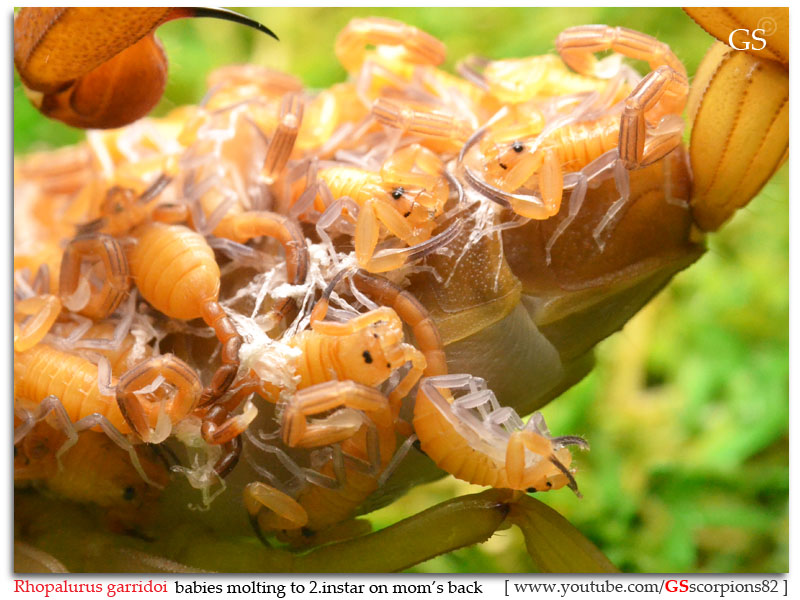 Growth rate:
The following are some references of the molting intervals. Do note that there might be variation as they are influenced by factors such as the environmental conditions which they have been kept in and the intensity of their feeding schedule. 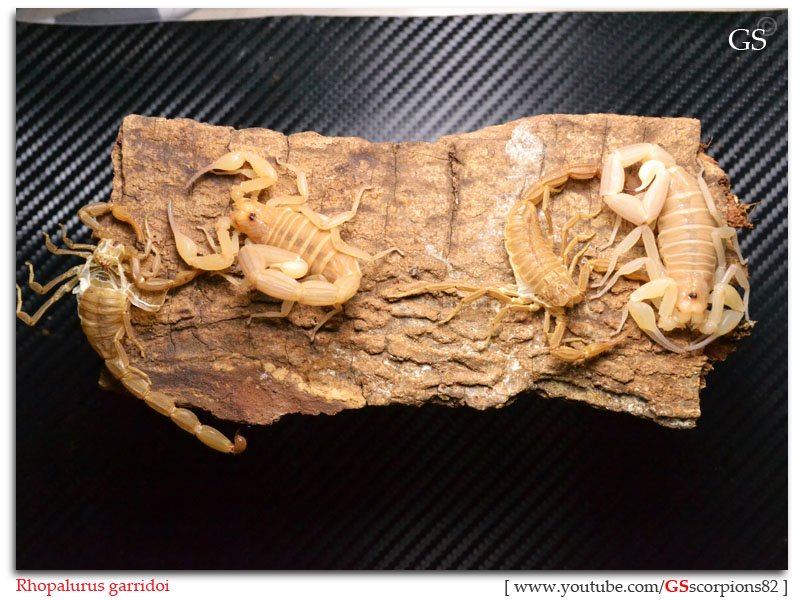 Husbandry:
Generally, for the overall husbandry for keeping Rhopalurus garridoi, you refer to the following caresheet:
[ASA] Bark Scorpions' Caresheet

However, do note that they have different requirement when it comes down to humidity. Recommended humidity is between 50-60% as Rhopalurus garridoi is pretty much prone to mycosis just like any other desert scorpions. 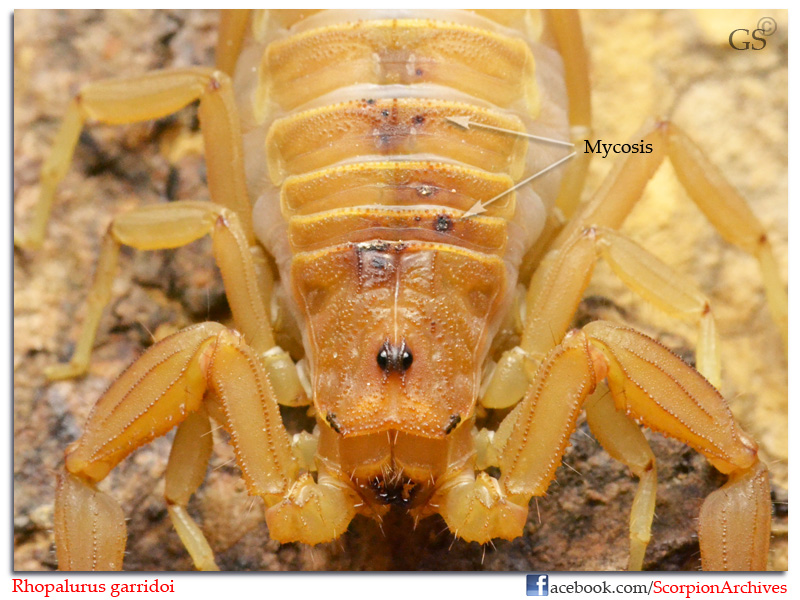 Counter-measures:
Prevention is better than searching for a cure, I would recommend keeping R.garridoi on dry coco fibre. Ensure that unrestricted ventilation is provided for their enclosure.

Water provision:
Younger instars (2-4.instar) are generally more tolerant to higher humidity and you may provide them with water by misting a corner of their enclosure on a weekly basis. I would say, not more than 35% of the substrate surface should be kept moist at all times.

For 5-7.instar specimens, in order not to raise the humidity of their enclosure, i would recommend you to provide a small bottle cap (on a weekly basic) for water provisioning instead.

Support ASA Articles!
If you like our articles, we appreciate your help by sharing us to the other keepers in the hobby via the following methods:

► "Like" us on our Fan Page at facebook.com/ScorpionArchives to receive all our latest pictures, videos and project updates with regards to Scorpion Breeding.

These free articles are wrote based on our passion in the hobby. With your support above, you have brought greater motivation for us to carry on writing

*Reserved post for more pictures and videos on Rhopalurus garridoi

Hey GS!
How many babies can come from one pregnancy in R. garridoi i have a female im considering to breed. Thank you